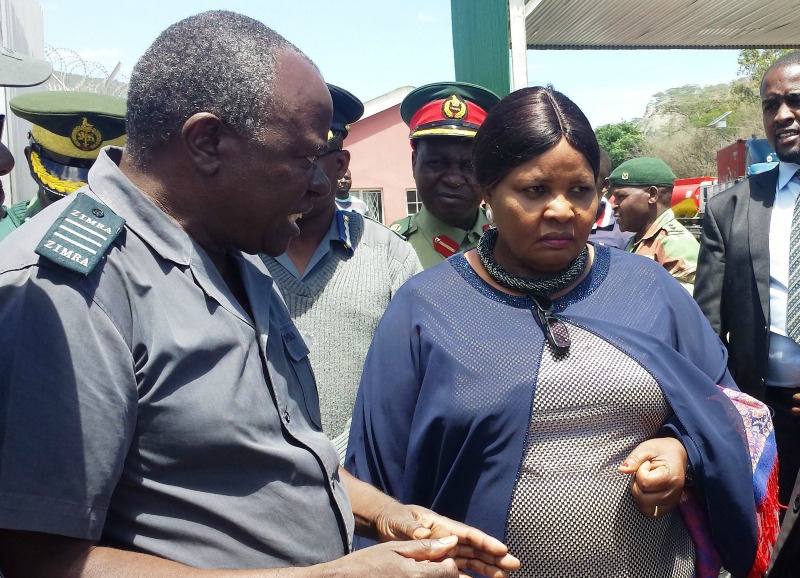 Minister Gwaradzimba gets briefing from a Zimra official
Spread This News

Mutare: FRUSTRATED truck drivers Wednesday mobbed Minister of State for Manicaland province, Ellen Gwarambadzimba telling her they were often made to spend up to four days parked in queues for their cargo to be cleared by lethargic Zimbabwe Revenue Authority (Zimra) officials.

The Minister had taken time to visit Forbes border post to get a first-hand experience of the rot at the country’s border post with Mozambique.

This followed numerous complaints officials were taking time to clear cargo from Port of Beira in Mozambique into the country.

The minister flew into a chaotic situation at Green Motor Service (GMS) Dry Port Wednesday with irate truck drivers asking her to stamp her authority on officials who were “sabotaging” the country through unnecessary delays in clearing cargo.

The Beira headquartered GMS runs the Mutare Dry Port, which is involved in clearing goods from Port of Beira in Mozambique.

Drivers and transporters accused Zimra officials of sleeping on duty and causing unnecessary delays and traffic jams at the busy border post.

They told the minister they were being made to spend four to five days sleeping in queues at the no man’s land after going through a hassle free process on the Mozambican side.

The drivers accused Zimra officials of deliberately sabotaging movement of cargo into the country.

“It`s bad that we spent days sleeping in a 20km queue without bathing because Zimra officials don’t care. They are just sleeping on duty and we don’t know why,” said another driver while narrating his own experiences to the minister.

Another driver said Zimra was sabotaging government’s attempts to replenish stocks in the country as essential cargo such as fuel and wheat was also caught up in the delays.

Zimbabwe is currently battling an acute shortage of the two products.

Some drivers said Zimra should recruit energetic staff from varsities while others were blunt on saying the tax collector should consider getting rid of lethargic aged staff.

“We need new guys at Zimra because the old madhara awa havachazvigona. They take close to two hours to clear a single vehicle. Havachaoni zvakanaka ngavachienda kumba,” said one driver.

According to some drivers, queues only started moving after Zimra officials at the border had been informed of the minister’s visit.

Transporters said they were losing revenue and business as they were being forced to pay more than what they should because of the delays.

Transport Operators Association of Zimbabwe (TOAZ) General Manager, Wilfred Ramwi also complained that they were being charged $7 a day to park their vehicles at the dry port for inspection arguing that GMS was just an extension of the border post.

Zimra Enforcement Manager Clifford Chamboko was at pains to explain the delays while assuring the transporters the parastatal was working round the clock to expedite the process.

He also shifted the blame on Mozambican authorities he said also slowed down the process by failing to allow pre-cleared trucks to jump the queues into Zimbabwe.

“Our counterparts want a single file queue for all the trucks,” Chamboko said, adding, “Clearing of goods involves a lot of people and this may cause some delays but we are working round the clock to normalise the situation.”

Minister Gwaradzima, on her part, also assured transporters the situation was going to normalise soon as Zimra tries to find new strategies to improve on efficiency.