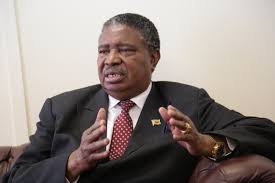 Ncube said this last week during a road rehabilitation programme in Kwekwe.

The minister said former President Robert Mugabe was a Jonny-come-late to the liberation struggle whilst his former Mphoko was a Mozambican who didn’t know the ideology of the ruling Zanu PF party which consequently led to his ouster from the presidium.

“The succession issue was very clear in Zanu PF starting from the time of Herbet Chitepo to Ndabaningi Sithole and Robert Mugabe. It was no secret that after Mugabe, President Mnangagwa was a natural successor but he (Mugabe) allowed himself to be misled by his wife and wanted to leave the Presidency to his wife; we wouldn’t allow that,” he said.

“In ZAPU there was Joshua Nkomo then Joseph Msika followed by John Landa Nkomo and this Mozambican Phelekezela Mphoko who didn’t know the ideology of our revolutionary party,” he said.

Mphoko, a former Zipra commander, lived in Mozambique during the later stages of the liberation struggle in the late 1970s. He married a Mozambican with former South African president Jacob Zuma being his best man. He was to become Zimbabwe’s ambassador to Botswana and South Africa.