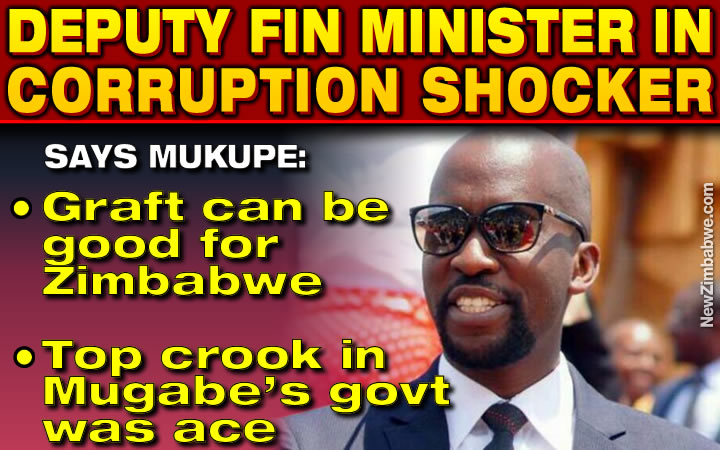 DEPUTY Finance Minister Terrence Mukupe surprised guests to a roundtable discussion in Harare Tuesday after he said corruption could be positive for the country.

In his address, Mukupe said he had read some article to that effect and that he had some life lessons to prove the benefits that the scourge could yield for the nation.

Corruption has been a major headache for the country over the years despite the existence of an anti-graft commission which is a constitutional body.

“I read an article to the effect that corruption can be also positive for the country. After going through that article I can actually give you some life lessons I had. I remember when I was advisor to ESSAR (An Indian company that wanted to invest in Ziscosteel) and ESSAR wanted to come into Zimbabwe, someone approached me and said the fundamental mistake you are making with ESSAR is that you don’t have a local partner.

“Make sure that you have a local partner if your things are going to work well. And I remember the Indian investor said to me; but government is my partner and I would like to believe that everything would work well.

Mukupe said at one point a minister in former President Robert Mugabe’s cabinet, who was accused of massive corruption, turned out to be the one who contributed more than any other to the national fiscus.

“So how do you then explain that? So I guess it’s an issue that if we were to assume that he was corrupt, then I guess his goals were aligned with the goals of government and everything else was moving on well and it became positive corruption for the country,” he said.

Mukupe said legislation could only do so much to address the issue of corruption as it was deep rooted in society whose moral fibre had decayed so much that people were now normalizing the abnormal.

“It’s the moral fibre of our society and what I always say is that as Zimbabweans we are generally corrupt people and the reason why I say we are generally a corrupt people is that if we were to do a quick survey privately, anonymously in this room here probably over 90 percent of the people here have bribed some police officer sometime,” he said.

Mukupe was recently accused of assaulting a senior accounts officer in the ministry of finance for giving him what the thought was small travel allowance.

Ahead of that the minister (then an MP) was mentioned in the fuel scam involving four tankers that entered the country with 140 000 litres of diesel purportedly in transit to the Democratic Republic of Congo, whose contents were emptied in Chitungwiza and replaced with water.

The Zimbabwe Revenue Authority did not charge excise duty for the fuel at Forbes Border Post after being duped the cargo was destined for the DRC. This prejudiced the State of $55 650.

Zimra intercepted the four tankers at Chirundu Border Post after detecting a suspicious detour using its newly installed electronic cargo tracking system, and upon inspecting the trucks discovered that they were now carrying water.

In their urgent chamber application which they filed in February, the six said they had been left with no option but to approach the court for recourse after the officers at Mabvuku Police Station, were threatened with loss of employment if they attempted to evict the minister.

The case was, however, dismissed with costs.