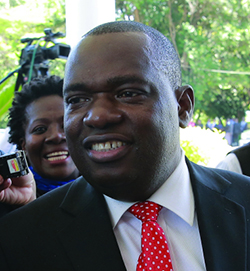 THE government appears to be in a quandary on whether to mend ties with Libya after ex-president Robert Mugabe’s abrupt decision to expel the oil-rich country’s ambassador when Muammar Gaddafi was toppled.
Gaddafi, a key Mugabe ally, saw his 40-year stranglehold over the oil rich north African country collapse in 2011 after a popular uprising, igniting celebrations among Libyan exiles across the world.
Then Libyan ambassador to Harare, Taher Elmagrahi, was caught in the euphoric drift that had seen his country’s ambassadors elsewhere switch allegiance to the new rulers in Tripoli.
Elmagrahi led dozens of his compatriots to burn down Gaddafi’s embassy portraits. Unimpressed, Mugabe summarily expelled the envoy.
Libya’s Harare embassy remains unoccupied to date, with dust coated furniture still visible through broken glass windows.
However, with Mugabe out of power, eyes are on Harare to see whether the new administration would re-establish ties with the north African country which has been locked in vicious sectarian violence and state collapse since Gaddafi’s ouster.
Foreign Affairs Minister Sibusiso Moyo told legislators last week that government was double minded over the matter.
“We have got no problems with the Libyan people,” he said.
“We are only waiting for the Libyan situation to settle and so that we can cooperate with an appropriate government in Libya. Otherwise, we have always been ready with our relationship with the Libyan people.”
Probed further, Moyo said government stood guided by the African Union and was ready to accept any Libyan envoy sent to Harare to present their credentials.
“Circumstances under which the last ambassador left are common cause but what we are saying is that since then we are waiting for them to come and present their credentials at an appropriate.
“The Libyan situation has been having different regimes fighting for control in that area. So far, there is the Libyan government which is being accepted by the African Union and that is what we follow as well.”Advertisement