ZANU PF MP for Masvingo North and minister, David Marapira has declared himself as the country’s de facto Vice President following the resignation of Kembo Mohadi over a sex scandal.

Marapira, who once worked as Minister of State in Mohadi’s office, made the claims Friday while addressing farmers at Mara ranch located in his constituency.

He told the farmers he now occupied one of the most powerful posts left by Mohadi in government.

“I am now sitting on the chair that the former vice president Mohadi used to sit on.

“What I say now while on that chair is what is supposed to be done,” he said.

He then promised the farmers two combine harvesters and three centre pivot irrigation systems which he said would be delivered before year end.

Marapira (pictured below) is officially a Minister of State in the Office of the President and Cabinet in charge of Monitoring the Implementation of Special Agricultural and related programmes that include Command Agriculture and Irrigation Development. 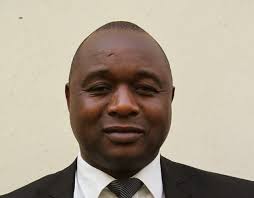 However, some farmers scoffed at his statement accusing the top government official for making empty promises for the constituency in his two terms in office.

The farming community members said they were being confronted by a lot of challenges which they have tried to bring to the attention of government with no positive outcome.

“We still don’t have a school or a clinic in this area, 20 years after we were allocated this plots.

“We have highlighted our plight to him over the years, but nothing is taking place on the ground,” one farmer said.