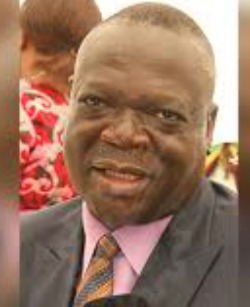 Lands Agriculture and Rural resettlement minister, Air Chief Marshal Perrence Shiri (Rtd), said government was going to double the production of beef, goat and organic chickens (meat) in three years.
Currently the country’s slaughter stocks (tonnes) of beef, goats and organic chickens stands at 350 000, 400 000 and 5 million per year.
Beef production declined at the turn of the millennium when government was placed under sanctions by the European Union which was its major buyer of the product.
Speaking at the recent launch of the special fisheries and wildlife production programme in the capital, minister Shiri said he was optimistic that the new programme was going to increase the country meat production.
“Currently on beef we are slightly above 350 000 and we want to double the number by the year 2021,” said Shiri.
“ We are currently producing  65 million liters of milk per annum a figure we intend to  increase  to 120 million liters  by 2021,  and on pigs currently  the country is slaughtering 170 000 pigs which we want to  be increased to 250 000,  the same as with goats which we are  slaughtering   400 000 and our aim is to increase it to  2 million.
“On boilers we are at 70 million and we want to increase to 90 million, and eggs which are at 50 million dozens per annum and our target in the next three years should be 70 million dozens, and finally organic poultry (free range chickens) whose quantity is currently at 5 million and we want to increase it to 10 million,” said the Lands minister who is also the cabinet’s deputy food security chair.
Core- sponsors of the command livestock programme, the Grain Millers Association of Zimbabwe (GMAZ), pledged to provide stock feeds to the animal husbandry sector to assist Shiri realize his goals.
“We are currently operating at 35% on maize milling and we have spared 65% which we are going to deploy towards milling stock feeds,” said GMAZ chairman Tafadzwa Musarara.
“We are also working with our financial advisers MetBank and we have prepaid all the wheat being 470 000 tonnes of the wheat that has been bought under command agriculture which I guess it has been the biggest harvest since UDI,” he said.
Advertisement