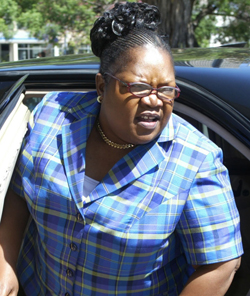 VICE PRESIDENT Joice Mujuru has not resigned, according to a senior official in her office.
Sylvester Nguni, Minister of State in Mujuru’s office, spoke amid swirling rumours in Harare and on social media that Mujuru had tendered her resignation as vice-president.
Nguni told NewZimbabwe.com that the vice-president is “doing her duties as normal” as she does every day and was not moved by the media attacks that are currently being unleashed on her by the state media.
“That is a lie comrade,” Nguni said in response to the rumours.
“She is currently the acting president of the republic working at the instructions of the president (Robert Mugabe) who is outside the country,” Nguni said. “I don’t know anything regarding what you are asking.”
President Robert Mugabe was Tuesday away in Lusaka for the burial of late Zambian president Michael Sata.
The online press and social media was awash with stories that Mujuru had tendered her resignation after being pressured to do so by hawks within Zanu PF who are accusing her of being corrupt and an inept leader.
Zanu PF spokesperson, Rugare Gumbo, a fierce Mujuru ally, told NewZimbabwe.com that Mujuru was going nowhere.
He said Mujuru will not resign unless she is convicted by the courts on charges of corruption being levelled against her.
“We know who is spreading such rumours; these are the people who want her out. They are so desperate to have her out,” Gumbo said.
He said there were some people within Zanu PF who were now so “desperate for power” to an extent that they were now causing chaos within the party.
“They would want to cause chaos in the country, we know their machinations and we are prepared for them,” he said.
Mujuru has been under pressure from hawks within Zanu PF who want her out for allegedly plotting against Mugabe.
Mugabe’s wife, Grace, has taken the fight a step further telling the vice-president to resign or face the wrath of the masses at the Zanu PF congress in December.
Rumours of Mujuru’s resignation came as seven Zanu PF provincial chairmen aligned to her faction were booted out over the past three weeks.
Mujuru has denied charges that she was plotting against Mugabe. Last month, she also denied that she was corrupt, saying although she was not a saint, she should not be punished for sins she did not commit.Advertisement