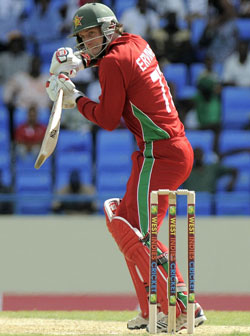 Solomon Mire and Craig Ervine struck half-centuries as Zimbabwe clinched the three-match series by chasing down a revised target of 229 with six balls to spare and seven wickets in hand. Victory was sealed when Sean Williams, who struck an unbeaten 19-ball 29, hit Paul van Meekeren for successive boundaries in the 36th over.
The Netherlands, who were bowled out for 142 in the series opener, gave a better account of themselves after electing to bat by posting 291.
Wesley Barresi (67) and Stephan Myburgh (77) put together a 143-run opening stand in 23 overs to lay a strong platform before Zimbabwe’s spinners slowed things down and picked up all the six wickets to fall – Sikandar Raza was the most-successful with figure of 3 for 40 with his offspin.
In reply, Zimbabwe were cautious after the loss of Hamilton Masakadza in the sixth over, but Mire and Ervine helped drive the chase.
At one stage, Zimbabwe were handily placed at 101 for 1 when play was stopped because of rain in the 20th over.
They added 59 in the eight overs eight overs that followed the interval to lead the cruise before Williams saw them home.
The third and final one-dayer will be played at The Hague on Saturday.Advertisement