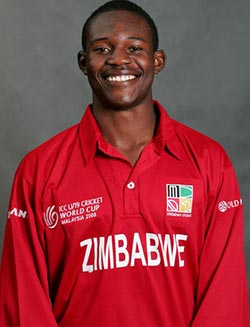 SOLOMON Mire’s heroes were two of Zimbabwe’s most significant cricketers, Andy Flower and Henry Olonga.
But problems with the first-class system in his homeland led the young batsman to Australia, where he has been elevated to the Melbourne Renegades’ senior list on the eve of the Big Bash League.
Each BBL team has a community rookie, with contracts going to players from rural communities, indigenous backgrounds, low socio-economic areas and non-English speaking backgrounds. But the rookies can only play in the BBL if they replace an injured player on the senior list.
When Renegades batsman Daniel Harris broke a hand at training on Monday, coach Simon Helmot seized the chance to promote Mire, the 24-year-old who plays Premier cricket for Essendon and blasted 101 from 53 balls in a Renegades practice match at the weekend.
Mire represented Zimbabwe at under-19 level but abandoned a promising first-class career when a friend invited him to play club cricket in western Victoria about four years ago.
”Zimbabwe wasn’t playing any international cricket and there wasn’t much happening in terms of local club or first-class cricket,” he explained. ”It was consistent, competitive cricket I was after.
”Growing up, I definitely wanted to play for Zimbabwe. My heroes were Andy Flower and Henry Olonga back in those days, but as I got older I broadened my thinking a little bit.
“The Ashes caught my eye. I wondered if I could emulate the all-round abilities of Andrew Symonds and Shane Watson.”
It remains to be seen whether Mire will get a game, but in the meantime he gets to rub shoulders with Muthiah Muralidaran and Aaron Finch.
”Sol raised more than a few eyebrows with his ton at Ballarat on Sunday and he certainly has the potential to be the story of the BBL season,” said Renegades chief executive Stuart Coventry.
The Renegades have temporarily replaced James Pattinson but he is expected to return from injury for the home game against the Heat on December 30.Advertisement