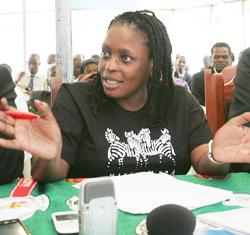 THERE are times when silence speaks louder and clearer than words. Such silence when used deliberately as a strategic tool by an organisation or leader can be a double-edged sword, the difference between organisational life and death.
Much has been said about Priscilla Misihairabwi-Mushonga by many voices, some sounding authoritative, others threatening, high sounding, bombastic, shrill and at times a touch desperate and yet not a word in defence of self has been heard from the subject of these many voices. This has been a difficult time for the iron lady of the MDC; of that one can be certain, but why the robust silence?
After everything that has been said and done, it is fair expectation that by now the political leadership of the MDC would have acted on the demands by many of the voices which have harkened Priscila to depart from Matebeleland South because she is not of authentic local stock. That she has not opened her mouth to point out that she was born and part-raised in uMzingwane by a daughter of the Sodindo Banana family must annoy many still. It is akin to a silent, forgive them for they know not what they talk about prayer.
It is great wonder that some in the MDC seemingly under the effect of the illusion of knowledge would want Zimbabweans to believe that the party’s Secretary General clandestinely inserted her name on the PR list without consultation or anyone noticing way back then before the elections happened, the so called abuse of office. Clearly this is preposterous and points at grapes gone sour somewhere in the green garden. That she exudes confidence of the moon which continues to shine despite the howling foxes, crying hyenas, barking dogs and hooting owls is a challenge to those who are fighting her from behind the bushes to come out in the open and take aim at their real target and not to use her for target practice.
Many who have been following the Priscila debate wonder why she has been persecuted so gravely. Her prosecutors hiding behind a constricted definition of devolution so vulgarized that anyone who does not know better would misconstrue devolution as some ugly form of ethnic segregation instead of the framework for the equitable distribution of scarce national resources, according locals within a defined geographical zone priority in accessing opportunities for jobs, deciding development agenda and utilization of resources among many of its equalizing variables.Advertisement

The legitimate question though is who amongst her aggressive accusers are being puppet-strung and what colour is the piper’s tunic, indeed who benefits from this fight against a leading proponent of devolution of power, an unwavering voice for equality amongst Zimbabweans regardless of tribe, creed, geographical location, gender, language, political party membership or religion. This is a woman who speaks unequivocally for Matebeleland, a region that suffered lack of real development because of the sad reality of the politics of the early 1980s and later economic gluttony and over-centralization as epitomised by bambazonke.
Could the fact that she is seen as a ‘mutengesi’ by those who believe that she has no right to challenge the lopsided nature of our national development paradigms be the reason she faces incessant persecution and attempts at political annihilation? Indeed, telling might be the shrill voices of mockery which point at how she has been hounded and hung out to dry by those for whom she forsook the comfort of the majority, those with whom she thought a just and principled stand against all manner of injustice would be confronted head on.
The mind doth boggle at the reason why a political party with such a talented woman for its Secretary General, a champion of the struggle for national equality and fighter for women’s emancipation would want to hide her talent under a table like the biblical lantern. There is no doubt that within the Zimbabwean context she stands up there with the best that this nation has produced and many would count themselves privileged to have her in their corner. Clearly whatever the reason for her persecution, there is more to it than meets the eye.
A party so badly mauled in the recent election should close ranks and rebuild, understand that the ‘Priscilla must go’ pettiness is now a side show, a fight over the carcass of a mouse after failing to down the priced buffalo bull. Much has been achieved by the stoic yet strategic silence of Misihairabwi-Mushonga. She has averted an orgy of internal political cannibalism which threatened to disembowel the entire MDC, side-stepped political booby traps and land mines to chart a path for the party’s reconstruction agenda.
While we may never know why there has been so much obsessive rancour and brouhaha about her deployment and persona, she has exhibited mature leadership by avoiding the temptation of burning down the whole house to flush out a rat. Maybe, just maybe men are from Mars and women indeed do come from Venus.
Zethule Nkengana is a life student of political science and can be reached at nkengana@gmail.com