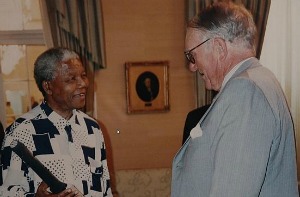 IT is easy now for those such as Bill Shorten, Kevin Rudd and Julia Gillard to make a point of extolling former Australian PM Malcolm Fraser’s role in helping bring an end to apartheid in South Africa.
He was co-chairman of the Commonwealth’s pompously ­titled Eminent Persons Group at a critical time in the history of the apartheid nation in 1985, when its white government was cautiously seeking to open negotiations with the imprisoned Nelson Mandela.
Fraser was an outspoken ­opponent of apartheid and a supporter of sanctions. He and other members of the group were ­allowed unprecedented access to Mandela in jail.
It is easy to overstate the significance of that meeting, but there is no doubt that the “eminent persons” — especially Fraser and his co-chairman, the former Nigerian ruler General Olusegun Obasanjo — played a vital, early role in the negotiating process then getting under way that was to lead to Mandela’s release from prison and the constitutional talks that culmin­ated in the “freedom election” and end of apartheid in 1994.
Much more awkward is finding much good to say about the key role he played in propelling Robert Mugabe into power in Zimbabwe, his misjudgment summed up in a letter he wrote on March 5, 1980, to the leader who was to become one of modern history’s most reviled and deranged dictators.
After years of so-called chimurenga, (the liberation struggle), Mugabe’s Zanu-PF party had won an overwhelming victory in a pre-independence election. Mugabe was about to be installed as prime minister under then president Canaan Banana (Mugabe didn’t become president until 1987).
Fraser told him: “I am confident that under your leadership Zimbabwe will make great progress in achieving your goals of peace, prosperity and unity.”
The plight of millions of Zim­bab­weans, black and white, in the decades since then shows just how wrongheaded that Fraser call was.
And there is no excuse in trying to minimise the role he played: as Fraser’s 1987 biographer Philip Ayers wrote, “the centrality of Frase­r’­s part in the process leading to Zimbabwe’s independence is indisputable. All the major African figures affirm it.”
Veteran Tanzanian leader Julius Nyerere, a key regional leader involved in the crisis in what was then Rhodesia, spoke of Fraser’s role as “crucial in many parts”. The then leader of Zambia (formerly Northern Rhodesia), Kenneth Kaunda, categorised it as “vital”.Advertisement

And Mugabe was quoted by Ayres as admitting: “I got enchanted by (Fraser), we became friends, personal friends … he’s really motiv­ated by a liberal philosophy.”
Given human rights outrages that have taken place under Mugabe’s protracted dictatorship, it is hard to do other than see gross misjudgment in the way Fraser allowe­d himself to be beguiled.
Having known Mugabe reasonably well as a guerilla leader and then prime minister and president, I have some small sympathy for him, for the Zimbabwean despot in those days had immense personal charm and showed none of the sociopathic and racist tendencies he was later to manifest.
The trouble with Fraser is that he took so long to do much to acknowledge Mugabe’s failings, not doing so in any major way until long after the full extent of the atrocities being committed in Zimbabwe under Mugabe’s rule had become known.
In an article headlined “Why I backed Mugabe”, in The Australian in April 2008, he wrote of “the excesses of a most terrible regime”, arguing that “it is easy to forget the first eight or 10 years (of Mugabe as a leader) because of the depriv­ation, the stupidity, the injustice, almost the rape of Zimbabwe that has occurred during recent times”.
How much better for the victims of Mugabe’s oppression it might have been had he been more forthright in seeking to get the despot to change his evil ways.
He did, after all, believe that history had given him a central leadership role to play in the crises then besetting both Rhodesia, as it was, and South Africa. I recall long hours spent talking to him in his room in the annex of Johannesburg’s Carlton Hotel as he prepared to meet Mandela.
Unencumbered by any notions of modesty, he appeared to see his role as pivotal to the future of the entire southern African region.
It didn’t turn out to be quite as big as that, but it was important, and Mandela spoke warmly of their initial encounter, which was, at the start, all about Australian cricket rather than the war of liberation Mandela’s ANC was then waging against apartheid rule.
His role in assisting Mugabe’s passage to power in Zimbabwe is less understandable, as is his protracted unwillingness to do what Australian author Hal GP Colebatch suggested in 2008 should have been, given his longstanding friendship and influence, “to pressure Mugabe to leave as quickly as possible”.
More realism about the shortcomings of one of Africa’s most notorious rulers and less starry-eyed cant about his old mate Bob Mugabe and Fraser might have acted more expeditiously.
The millions of Zimbabweans who have suffered so much at the hands of the despot would have been grateful.