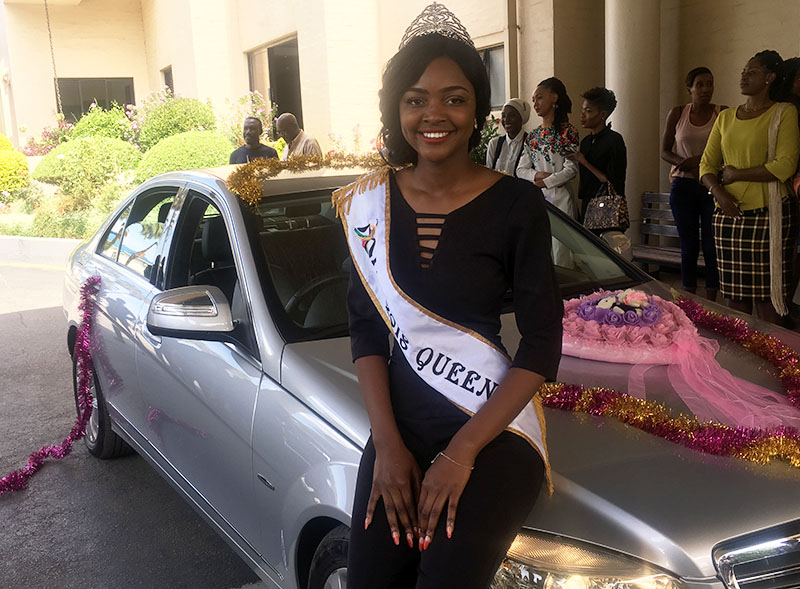 MISS Tourism Zimbabwe 2018, Tafadzwa Jaricha, 23, has been handed her Mercedes Benz prize for winning the pageant.

The vehicle was handed over at a Harare hotel this Tuesday by the Zimbabwe Tourism Authority (ZTA).

The Mutare-based lawyer by profession also pocketed $5,000 in cash and will represent the country at an international contest to be held in Malaysia next year.

In her acceptance speech, Jaricha revealed that she has since come up with a project named “Kureva” meaning to speak out which will be dealing with teenage pregnancies.

She added; “I was born on the 27th of June 1995 and I hold a bachelor’s degree in Law from the University of Zimbabwe.

“But being born in a small city and a high-density suburb of Chikanga, I thought my role was to watch others from influential backgrounds making it in life,” she said.

She expressed gratitude to the tourism minister Prisca Mupfumira’s words of encouragement throughout the pageant’s camp period.

Turning to her mother, Jaricha broke down into tears as she chronicled how she was raised.

“My dad passed on when I was just four-years-old, but mom you stood by me all the way. I love you deeply,” she said.

“The modelling industry has been marred by controversy due to lack of the link between knowledge and beauty.

“So, this time around we were looking for qualities that also go beyond beauty like ethical values and knowledge,” she said.

Dube said that the legal committee did thorough background research and expressed confidence that the finalist was a deserving candidate.