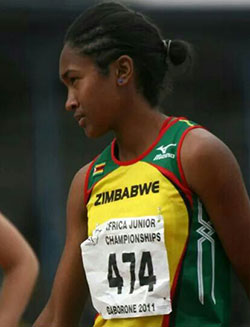 CATHRINE Makaya, crowned Miss Zimbabwe 2014 after a re-run of the national beauty pageant has a phenomenal story behind her.
To date, Cathrine has gone on her charity and inspirational campaigns, visiting Midlands schools, children’s homes, just to name a few as she prepares to represent her country at the Miss World Pageant in December.
Aged 19, Catherine, is a renowned practicing motivational speaker, multi-school colours winner, national multi-disciplinary record breaking sportsperson, internationally exhibited paint artist, former Junior Mayor of Marondera and, now, Miss Zimbabwe has been added to her already phenomenal portfolio.
Born in of a family of beauty, Catherine is niece to Connie Makaya, former Miss Rhodesia which confirms that lightening can indeed strike the same place twice – beauty and Beautimatics runs in the Makaya blood.
From the age of fifteen, Catherine had already begun breaking school, provincial and national records in track and field, with 100m, 200m dashes, and triple jump in feats that constantly got her trophies at Peter House School in Marondera.
Cathrine broke the Triple jump record for Zimbabwe, earning her several caps for representing the country, including at the All Africa Junior Championship Games of 2011.
Peter House School is known for producing excellent academics, but in the years of Catherine Makaya, they produced much more as her beauty was matched with her brains and physic, up until her move to Gateway School in Harare.
At Peter House, as a dynamic leader, Catherine Makaya rose in influence to become the Junior Mayor of Marondera in her lower sixth form, which gave her the opportunity to inspire the teenagers of Marondera and surrounding areas.
Having also contended with contenders in volleyball and basketball at Gateway School, Makaya rose through the ranks to become runner up at the girls’ national championships in basketball in 2013, earning the prize of Most Valuable Player.
She had just joined Gateway in 2013 for her sixth form, when her pioneering drove the school basketball team to go into the national championship which saw her winning the sports person of the year award.
A disciplined and focused young lady, Cathrine was accepted at a South Africaa university to study law, whilst being trained by two international track and field coaches who have produced more than 80 Olympians.Advertisement

In academia, Catherine is also known to have scooped school awards with moments of brilliance to balance the beauty and brains equation, the basis of her ability to articulate her cause of brilliance.
Catherine is also an internationally exhibited paint artist with her artwork having been showcased at international exhibitions.
In the world of modeling, nineteen year-olds have never been crowned Miss Zimbabwe – or for any other country for that matter – until Cathrine Makaya came round that is.