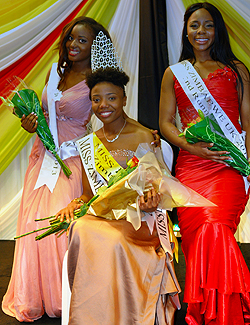 TWENTY-THREE-YEAR-OLD Varaidzo Mabvudzi was voted Miss Zimbabwe UK 2013 during the annual pageant held in Luton, England, last Saturday.
Mabvudzi, who works in the hospitality industry, proved a popular winner on the night as the re-launched pageant did away with the swimwear category which organisers decided was demeaning to women.
Not only did she win the big one on the night, she also took Miss Personality based on online voting and her performance during judges’ questions.
Coventry-based Monalisa Sibanda, 19, a network security management student, was voted first princess and the second runner up slot was taken by 22-year-old Ella Matilda Bvumbe, who runs her own online fashion shop.
Marshal Gore, one of the judges, said they were looking for a queen with the “highest possible reflection of the Zimbabwean culture and values” from among the eight contestants.
He added: “We are confident, based on all factors, that we have delivered the right verdict. Congratulations to all the participants for putting up the great show.”
Mabvudzi received her crown from the outgoing Miss Zimbabwe, Faith Nhemachena, in front of an appreciative crowd of about 150 people.
Several music performances on the night kept the guests entertained. The Kamikaze Test Pilots’ rendition of some Zimbabwean classics including Kubatana Kwakanaka, Rubatsiro and Pidigori Waenda went down like a storm.
Tsungai Tsikira opened the night with the national anthem before the group, Flame Lilly, showcased their marimba, African drums and traditional dances.
With DJs King Alfred and Sox on the decks, it turned into a great evening of entertainment.
Simbarashe Patrick Nyanhanga, the organiser of the event, implored Zimbabweans in United Kingdom to unite and support community initiatives in his vote of thanks.
Peter ‘Soxx’ Soko and radio personality Belinda Magejo were the hosts on the night.