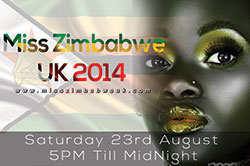 THIS year’s edition of the Miss Zimbabwe UK will be full of glitz and glamour with a deliberate effort to make the pageant as much a high profile entertainment event as it will be about mentoring the participants to better themselves the organisers have said.
The event explodes into life at the Quality Skyline Hotel in Luton, England on August 23 from 5pm till midnight, with the hosting gig being between popular personalities Roby Gee as well as Vickie Storm, a prominent television and radio personality on Zimbolive.
In an exclusive and heartfelt outpour of intentions and this year’s agenda, Simba Patrick Nyanhanga, said all things related to culture, entertainment and community development were being weaved into the fabric that would constitute the program’s ultimate material.
“We view Miss Zimbabwe UK as a monumental event to celebrate our culture, values, and inspire our youth to the positives of this community,” he said.
“This year we have invited senior qualified and dignified ladies to mentor the girls and encourage them in all positive aspects of life,” he added.
The pageant has attracted partnerships from a broad spectrum.
But organisers are still calling for all who have pride in being Zimbabwean and the concept of Zimbabwean pride being asked to come on board and sponsor the event which they say will bring out the best in Zimbabwean beauty, ethics and ideals.
“Speaking as a man raised by a single mother myself, empowering women and youth and boosting their confidence plays an integral role in our societal development,” added Nyanhanga.
The event also seeks to sell Zimbabwe as a tourist destination of note with Kazz being the toast of that ambassadorial role as he currently rides high with his song produced by both him and Bkay called Seven Wonders of Zimbabwe.
It is the song that Miss Zimbabwe has formally endorsed as theme song, with its lyrics inviting the world to visit and experience the wonderful hospitality Zimbabwe has to offer.
The organisers, weeks after launching the ‘road to the finale’, have said preparations are running smoothly with all indications that, come the day, the event will be one that lives up to its billing as it continues to grow in leaps and bounds as a date to look out for on the UK-Zimbabwe entertainment and cultural calendar.Advertisement

“Come the hour, come the day we shall make our people proud and tickets are selling fast. The only encouragement would be for people to make reservations and avoid the disappointment of failing to attend this unifying event in the event that tickets sell out ahead of the day,” said Nyanhanga.