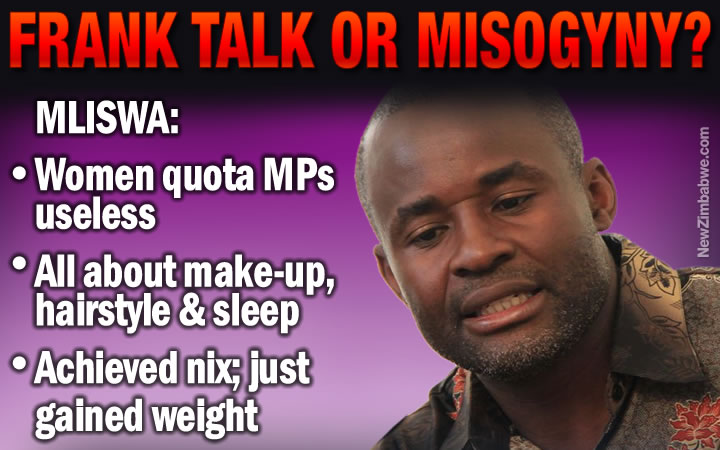 THE government should do away with the women who are elected to Parliament through the Proportional Representation because they are a waste of tax payers’ money, outspoken independent MP for Norton Temba Mliswa said.

“When they came in, they absolutely had no hair style, they had no make-up, so I am saying the only thing that I have seen changing is their hair styles and make up,” he said.

“They are now prettier than they came in to Parliament.”

Mliswa said as voters go to the polls this year, they must elect women with capabilities to represent and fight for their issues, not the calibre of women that have been in the 8th Parliament, who were known better for sleeping during deliberations.

Under the new system, female candidates go to Parliament through the Proportional Representation system where 60 seats are set aside for women as a way of fighting gender parity.

Some of those women also participated in the just ended Zanu PF and MDC-T primary elections and did not make it.

“And thank God some of them lost in the primary elections,” said Mliswa during a heated election debate held Wednesday evening at a local hotel in Harare.

He added, “The Proportional Representation women have done nothing, they have not represented women, people like Linda Masarira have been beaten up, Tabitha Khumalo has been abused and they are 60 of them, none of them said anything.”

“The only thing that has changed is that they now have beautiful faces and new wigs; that is the truth, I will maintain that position at any given time.”

“Look women are suffering and how many women issues have been debated? There was the abuse of women by police, others even pregnant, there was never a motion moved by women in parliament.”

Aspiring Member of Parliament Vimbai Musvaburi said Mliswa was pulling women down because it is small things like make-up that give women confidence.

However Mliswa said he was speaking about things he had seen and noticed from the women.

“I sit with these members in Parliament, I saw them when they walked in for the first time, they had no wig, no make-up, do you want me to lie?” responded Mliswa.

“And I have now seen them with wigs, with make-up, I don’t lie unfortunately, they have put on a bit of weight which is good because they are staying in hotels so what more do you want me to say?”

“All they do now is come to Parliament with nice make up and new wig and sleep.”