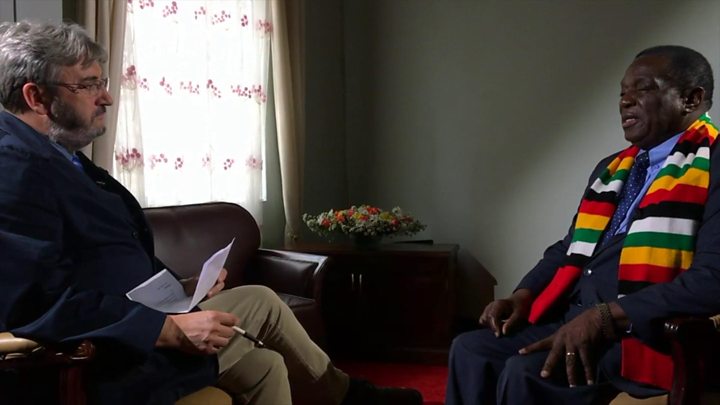 PRESIDENT Emmerson Mnangagwa has said he suspects a group linked to former first lady Grace Mugabe was behind an attempt on his life.

Two people died and more than 40 were hurt in an explosion near Mnangagwa at a rally in Bulawayo on Saturday.

Mnangagwa told the BBC’s Fergal Keane that he suspected the G40 group, which supported Grace Mugabe for the presidency, had carried out the attack.

The army intervened to oppose Mrs Mugabe’s attempt to succeed her husband as the country’s leader, and the ruling Zanu PF party then sacked Mr Mugabe, replacing him with Mnangagwa.

An exiled member of the G40 group, former cabinet minister Jonathan Moyo, has denied Mnangagwa’s accusation, tweeting that the blast “smacks of an inside job”.

He was referring to an apparent power struggle between Mnangagwa and his deputy, Constantino Chiwenga, the former army chief who forced Mugabe out.

Mnangagwa did not accuse Grace Mugabe of being involved in the attempt on his life.

He told the BBC he expects arrests to be made shortly.

“I don’t know whether it was one individual – I would think it is broader than one person. I would think this is a political action by some aggrieved persons,” he said.

Mnangagwa described Grace as someone who had frequently insulted him in the past.

“On what basis would I trust someone who was used by a cabal to say things that had no basis?” he asked.

Nicknamed “the crocodile”, Mnangagwa has a reputation of being ruthless, but he told our correspondent: “I am as soft as wool. I am a very soft person in life, my brother. I’m a family person. I am a Christian.”

Despite the apparent attempt on his life, Mnangagwa said there would be no countrywide security clampdown and elections scheduled for 30 July would go ahead in a free and fair manner.

Zimbabwe was stable and that foreign investors should not worry, he said.