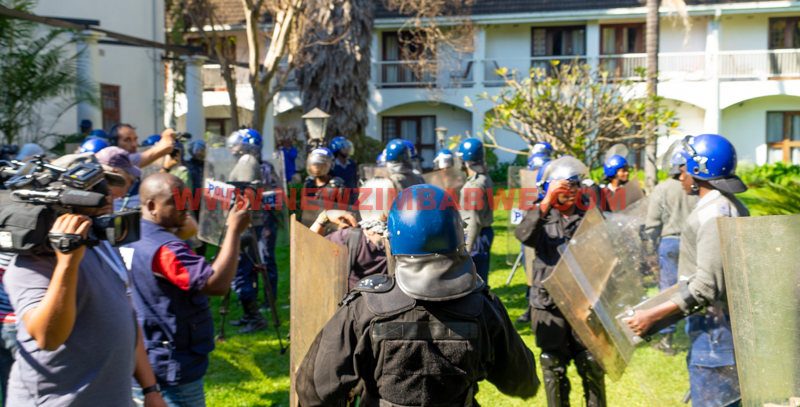 PRESIDENT-elect Emmerson Mnangagwa has condemned and further promised to investigate the police invasion of a Harare hotel where MDC Alliance leader Nelson Chamisa was scheduled to address the media on his party’s position over the outcome of the just ended national elections.

Some police officers in anti-riot gear stormed Bronte Hotel to stop the press briefing by the losing presidential candidate. The press briefing was attended by dozens of local and foreign journalists.

It took a struggle and the intervention of acting Information Minister Simon Khaya Moyo for the police to finally retreat.

Mnangagwa took to twitter Friday to condemn the police aggression with fears the incident could dent the image of his fledgling government amid opposition claims of poll related fraud by his regime.

He said his government has always protected freedom of speech, assembly and the right to criticise the government.

“This is an indispensable part of the new Zimbabwe. It is non-negotiable and will not change. We won the election freely and fairly and have nothing to hide or fear,” said the country’s leader.

“Anyone is free to address the media at any time. The scenes today at the Bronte Hotel have no place in our society and we are urgently investigating the matter to understand what happened.”

When police stormed the hotel, panic took over as puzzled journalists ran for safety, on one hand trying to protect their gadgets from damage while also trying to capture images of state intrusion.

The police banged their shields noisily while trying to intimidate the journalists.

There were a handful of MDC Alliance officials who had arrived ahead of Chamisa who was still to arrive at the venue.

The press briefing was allowed to proceed after Zanu PF national spokesperson and minister, Moyo had rushed to the scene to confront the police.

Khaya Moyo said there was no government as of the moment. He asked on behalf of Zanu PF for the police to leave.

However, police were forced to eat humble pie, issuing a statement saying the incident was regrettable adding that the intention was not to cause unrest.