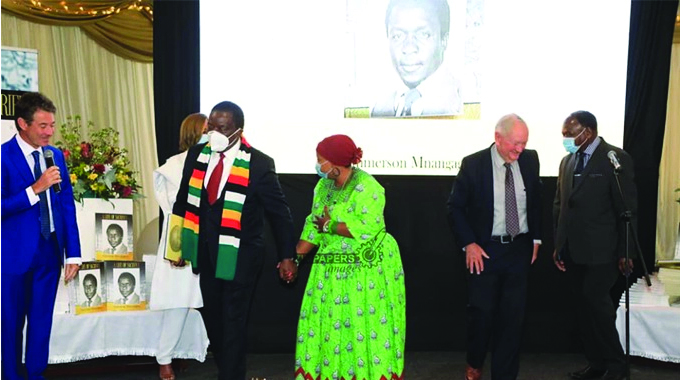 PRESIDENT Emmerson Mnangagwa’s biography, A life of Sacrifice, is proving to be a bestseller after it sold 50 000 copies just a few minutes after it’s launch in Harare Thursday.

The book, controversially authored by former MDC Alliance senior official Eddie Cross, is going for a princely US$15 per copy.

The same was quickly shared by Information secretary Nick Mangwana on the same platform.

The book chronicles Mnangagwa’s introduction to his and role in the liberation struggle right through the November 2017 coup.

Speaking at the launch, Mnangagwa, who was the guest of honour, urged youths to make sacrifices for Zimbabwe’s development as he did during and after the country’s liberation struggle.

“The book we launched today should never be understood to mean sacrifice begins and ends with any one life or any one generation. Our nation is pinned by perpetual sacrifices,” Mnangagwa said.

“What differs is the form and nature of sacrifice demanded of us at every development stage of our nation and the circumstances that face and shape it. In our case we had to pick up arms, suffer incarceration, suffer injuries and even die to win back our freedoms and collective independence,” he said.

“We are a generation that bore arms and went to war, in the process making sacrifices. Today’s generation must make sacrifices for our nation. This is demanded of them to advance the new development epoch we are facing.”

Author Cross heaped praises on Mnangagwa, saying he had created an attractive environment for those in the dispora to consider coming back home.

The book is part of a number biographies and autobiographies by Zanu PF politicians published recently.

Much like Obert Mpofu’s On the Shoulders of Struggle: Memoirs of a Political Insider, Cross’s book is however silent on Mnangagwa’s role in the Gukurahundi genocide.

Dube on the other hand clearly states Mnangagwa should ask for forgiveness.