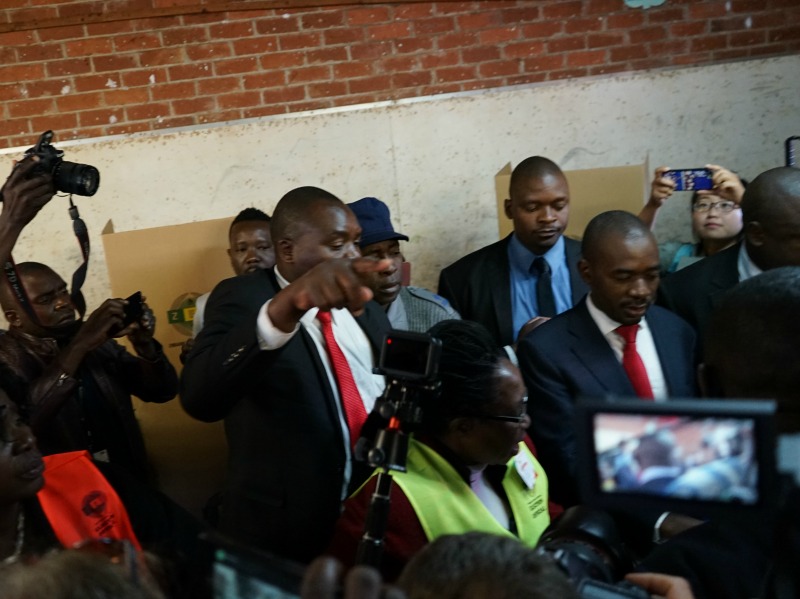 PRESIDENT Emmerson Mnangagwa and his main challenger Nelson Chamisa of MDC Alliance were today joined by former President Robert Mugabe in casting their votes with the two Presidential contenders voting in Kwekwe and Harare, respectively.

The President cast his vote at 10.02 am. He was accompanied by his wide Auxilia, and son Emmerson Junior who also cast their ballots at the same centre.

“I am happy that both the processes of campaigning was peaceful and the voting day itself is peaceful. I have no doubt that the process and the entire electoral processes will remain peaceful.

“I can assure you that this country is enjoying a democratic space which has never been experienced before.”

He was confident the vote shall produce victory for him.

When Mugabe arrived, there was a cacophony of chants from crowds which excitedly shouted his name “Gushungo” with some chanting “ED (President Emmerson Mnangagwa) Pfee” while others shouted MDC Alliance candidate Nelson Chamisa’s name.

In Bezel Bridge, Ward 4, Ngomasha, Mutare North where Mike Madiro of Zanu PF and Agrippa Bopela are major contenders, villagers in queues were complaining the process was very slow with many having been in queues for hours.

At Shundure Primary, voting went well and villagers were walking to polling stations and are determined to vote.

At Ngomasha Polling Station, Mutare North, presiding officer Elvis Chakanetsa said 3 people were turned away. Reasons were because of double registration, wrong polling centre and name not on voters roll. Villagers were happy about the process.

He was left fuming.

“I did register. How can I not register when I am a candidate and my house is around the corner. This is my neighbourhood. I have always voted here at Glatwin since 2000.

“If I don’t find my name in the voters’ roll, I will take them to the High Court. We are going to win by a landslide. My BP is not ZEC but my stress Emmerson Mnangagwa or Zanu PF not these Boffins and Buffoons. ZEC is incompetent. This is the worst ZEC we have ever had.”

In Harare West, parliamentary candidate Jessie Majome said she was satisfied with the voting process on the day even though there were long queues.

She thanked ZEC for rectifying an anomaly that would have prevented over 6 200 voters from casting their ballots.

“I think the elections this time will be fine and I am glad of that. I salute ZEC for creating more polling stations people will spend less time in queues, but the voters roll is still a cause of concern,” she said.

Stay on for more updates