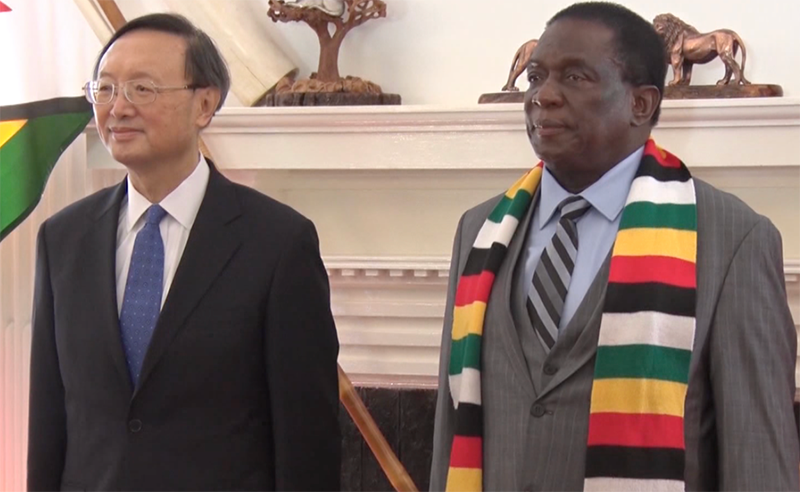 HARARE: Zimbabwean President Emmerson Mnangagwa on Sunday met with senior Chinese diplomat Yang Jiechi, with both sides pledging to step up exchanges and cooperation and advance the comprehensive strategic cooperative partnership to a new high.

During the meeting in Harare, the capital of Zimbabwe, Yang, a member of the Political Bureau of the Communist Party of China (CPC) Central Committee and director of the Office of the Foreign Affairs Commission of the CPC Central Committee, conveyed Chinese President Xi Jinping’s cordial greetings to the Zimbabwean president.

The friendship between China and Zimbabwe has a long history and in recent years, the heads of state of the two countries have met and exchanged letters on many occasions, leading China-Zimbabwe relations to maintain a high level of performance. The two sides have deepened mutual political trust and consolidated cooperation in various fields, said Yang.

While noting this year marks the 40th anniversary of the establishment of inter-party relations between the CPC and ZANU PF, the ruling parties of China and Zimbabwe, respectively, Yang stressed the two parties trust and support each other, laying an important political foundation for the all-weather friendship between China and Zimbabwe.

“China appreciates Zimbabwe’s important role in promoting China-Africa cooperation on the Belt and Road Initiative and stands ready to further strengthen all-dimensional exchanges with Zimbabwe, be it party to party, government to government, military to military and people to people levels, and conduct in-depth exchanges of governance experience with Zimbabwe,” said Yang. ” China is ready to provide more support for Zimbabwe’s economic and social development.”

Yang said instability, uncertainty and insecurity are prominent in the current international situation. China recently held the High-Level Dialogue on Global Development in the form of BRICS Plus, sending a positive signal of emerging markets and developing countries in promoting global development and solidarity and cooperation. China is ready to fully coordinate its position with Zimbabwe on multilateral affairs, jointly uphold the international system with the United Nations at its core and the international order based on international law, and make the global governance system more just and equitable.

President Mnangagwa asked Yang to convey his sincere regards to President Xi Jinping, while expressing warm congratulations to the CPC on its 101st anniversary which fell on Friday and wishing the 20th CPC National Congress a complete success.

Mnangagwa said the friendship between Zimbabwe and China has become stronger with the passing of time. Zimbabwe always bears in mind China’s firm support for its efforts to safeguard national sovereignty and oppose foreign interference and sanctions and remains grateful for China’s sincere assistance to Zimbabwe’s economic and social development over the years.

On the same day, Yang also met with Zimbabwe’s Minister of Foreign Affairs and International Trade Frederick Shava. They exchanged views on bilateral relations and issues of common interest.