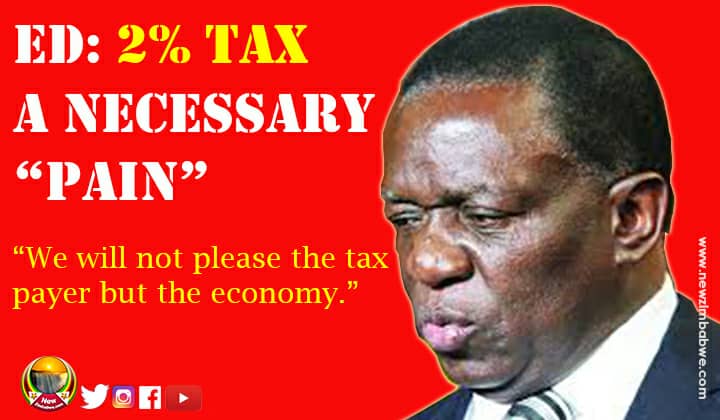 PRESIDENT Emmerson Mnangagwa Monday defended the new 2 percent tax recently levied on electronic transfers insisting it was a worthy pain locals have to bear with as his government takes measures to remedy the current economic crisis.

He was speaking at a breakfast meeting organised by Professional Women, Women in Business and Business Women Forum in Harare.

Government, through the Finance Ministry, last week introduced the 2 percent levy which was later revised to 2 percent on transfers above $10 following an outcry from the transacting public.

Zimbabweans are up in arms with their government for overburdening them with tax, much of which ends up being spent on non-priority areas.

But President Mnangagwa, under fire for alleged poll theft and failure to pull the economy from the abyss, argues the levy was more than necessary for the country’s debt-ridden economy.

“I am sure you have not studied as to who are exempt from that 2%.

“If you have taken care to study the exemptions of the 2%, some of the issues you are raising, you would not have raised them,” said the President after he had been asked by participants on what his views were on the new fee.

“We have taken cognisance of not punishing our people unnecessarily, but it is necessary if you look at the challenges that we are having now both for the issue of internal debt and external debt.

“Where we stand today as Zimbabwe, for us again to become a viable economy, a solid economy, we are going to take measures that are going to be painful and this is one of such measures.

“I have no doubt that as you said possibly it could have been done better but at this time…we must dialogue, and this was only the beginning and now receiving positive and negative.

President Mnangagwa, elected for a fresh term July this year, was adamant his government shall stick to what is right even if this did not please the average man at the end of the day.

“We will not please the tax payer, no; we want to please the economy of the country and not the individual.

“The individual, myself and yourself, must make sure that we produce and produce.

“We need productivity for us to earn the foreign currency which we can use to modernise and retool both industry and commerce. It will not come from anywhere but from productivity.”

He added; “We will not in our quest to leapfrog and cover the period of two decades of stagnation, these things have become necessary.

“Yes we may differ as to how that journey might be walked but we must begin walking and as we walk the journey, patriotic Zimbabweans will come forward and say we should do it this way, why don’t we do it this way and we are a listening leadership and we will always take on board those contributions that we think are constructive and progressive for purposes of having a solid economy for our country.”