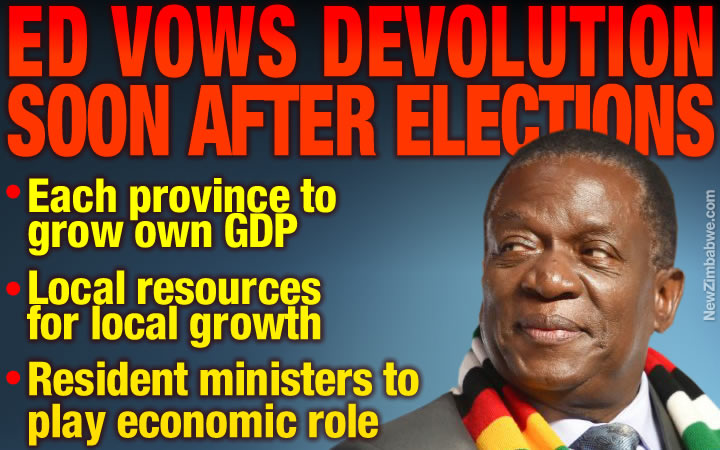 GOVERNMENT will begin to fully implement devolution in terms of the constitution soon after the July 30 elections so that all provinces will run their own economies, says President Emmerson Mnangagwa.

He said this in Gwanda, the provincial capital of Matebeleland South which is one of the provinces whose inhabitants pushed for devolution and decentralisation during the making of the new constitution ahead of the 2013 elections

In terms of Section (2) of the country’s Constitution, central government should cede more powers to provincial councils so they can determine their development priorities.

Under this, each province will have its own economic development plan underpinned by resources found in that province.

Provincial councils will, under the strategic direction of provincial ministers, craft economic plans.

Mnangagwa’s comments come after finance minister Patrick Chinamasa recently warned that devolution will be too expensive for the state and encouraged government to change the law.

“Devolution will require the surrendering of some amount of power to the provinces under provincial councils in terms of our Constitution, to give a province authority to manage the economy of that province and then the Provincial Minister’s role will now change. It will become an economic role,” said Mnangagwa.

He added, “They (provincial ministers) must see that the GDP of their province must grow. They must look at the resources of that particular province. Like Matabeleland South, you must make sure that in terms of agriculture, for instance, we have always favoured you, we have Mangwizi and Arda Maphisa (that) we have developed. When I started to come here, we only had about 250 hectares under irrigation.

“Last summer we had 750 hectares and this year we will reach 1 000 hectares and if we get 10 tonnes per hectare because it’s well managed, it means we will have 10 000 metric tonnes of grain at one farm of Arda and the same at Mangwizi.

“If we do that we are now self-sufficient in terms of food and you will be exporting to others. That is important.

“The second thing is that the Minister of State here in Matabeleland South should now know that resources that are here, the gold which is here, lithium which is here, diamond which is here and the copper which is here must be exploited. You must now put programmes and put on course an environment where those resources have to be exploited. That is the only way you can increase the assets of the province; the only way you can develop. When we do so, we will have good schools, good roads, good clinics and good houses. No one should be left behind saying I am poor. How can you be poor in a rich country like ours?”

Mnangagwa’s promises will come as sweet music to the people of Matebeleland who have always cried for devolution.