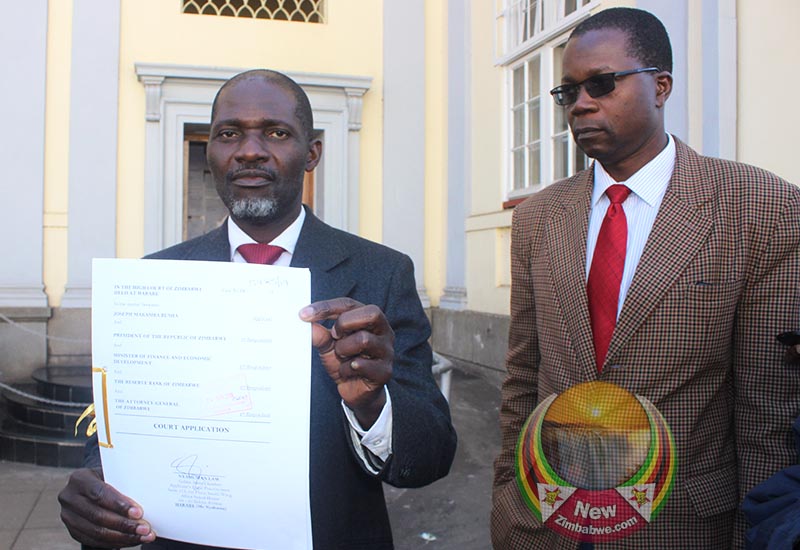 Busha told journalists outside the High Court Friday afternoon that he wanted President Mnangagwa and Finance Minister Mthuli Ncube to reverse Statutory Instrument (SI) 142 of 2019 that was used to make the policy changes that left the markets reeling but stopped run-away parallel market currency rate.

Through his lawyer Tichawana Nyahuma, Busha wants an order reversing Statutory Instrument (SI) 142 of 2019 which abolished the multi-currency system that had obtained for the last 10 years.

“We are here to serve notice to the President, he should set aside SI 33 of 2019 (that was used to introduce the RTGS as an official medium of exchange in February). Time for his government and the ruling party to manipulate the people of Zimbabwe is over. We want him to act responsibly and be accountable for Zimbabweans,” said Busha after filing the application.

Busha wants a return to the multi-currency system.

“The currency that has been introduced cannot be traded anywhere. We need to make sure that it’s transparent and people have got access to the currency it must be backed by economic activities.

“They must keep the basket of currencies, I believe mainly the Rand and the US dollar must remain until Zimbabwe is able to produce,” he added.

In introducing the new policy, Mnangagwa said Zimbabwe had taken a positive step towards returning to economic normalcy.

Zimbabwe has for the past 10 years used a basket of currencies dominated by the US dollar but early this week, Treasury announced the local dollar will henceforth be the only medium of exchange for all domestic transactions.