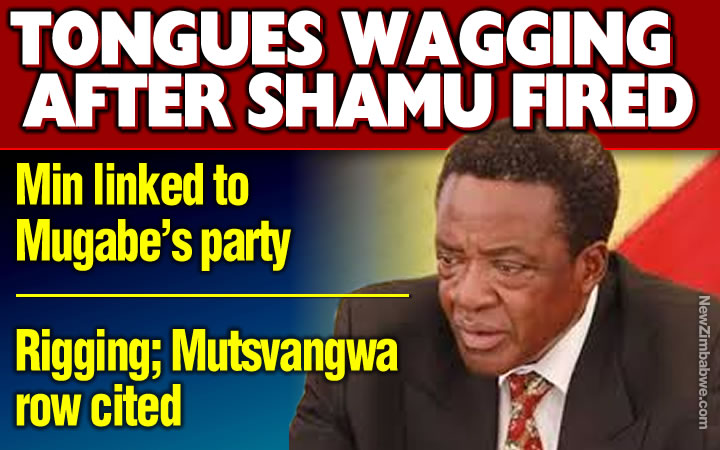 According to State media reports, Shamu was relieved of his job but no reasons were given.

Shamu has been in the eye of a storm after he was found with marked ballots used in the Zanu PF primary elections last month.

The ballots were marked in his name.

Mnangagwa’s special advisor Christopher Mutsvangwa also blamed Shamu for his political problems after he lost the first round of voting in the Norton constituency primary elections before his rival little known Langton Mutendereki was forced to “step aside”.

Mutsvangwa claimed the primary elections had been rigged by Shamu and his wife Constance with assistance from Norton independent MP Temba Mliswa.

“He was the conduit through which money was being funnelled to destabilise Zanu PF and influence the primary elections results. Shamu was given $300 000 by Grace (former First Lady) to fight Mutsvangwa, (Justice minister Ziyambi) Ziyambi and Chegutu West MP Dexter Nduna,” New Zimbabwe heard.

Secretary to the President and Cabinet Misheck Sibanda announced Shamu’s sacking to State media but gave no reasons.

Also kicked out of government employ was former Public Service Commission chairperson Mariyawanda Nzuwa. Nzuwa was pushed to the President’s poll a few months ago after a spate of public service strikes including industrial action by doctors initially and later nurses and picketing by teachers.

Shamu, a former Zanu PF national commissar, was initially fired from Zanu PF as part of a brutal purge by Mugabe in 2015 that also claimed the scalp of then Vice President Joice Mujuru and her inner circle.

He returned to favour but waited in the wings only to be appointed minister after Mugabe was forced out of power last November.

The former Information minister’s sacking comes as rumours swirl around that his successor as a Zanu PF national commissar Saviour Kasukuwere could be returning to the country and Zanu PF after just over half a year in exile.