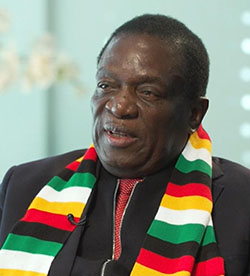 HIS rise to power and the exit of former leader Robert Mugabe brought relief to Zimbabweans and the international community, but Emmerson Mnangagwa’s new administration is fast becoming unpopular for disharmony in policy pronouncements and decision making.
Mnangagwa has shown strong workmanlike tendencies and he appears geared to deliver results for a Zimbabwean economy still hobbling from years of poor economic policies under Mugabe. Inflation, exacerbated by foreign currency shortages, closed 2017 at 3.4% and most finance institutions such as the AfDB and IMF project economic growth of 1% for this year.
Mnangagwa’s government has hit the road running, fixing road infrastructure, removing police from the roads and quickly settling for a revamp of the indigenisation policy; the new administration has been applauded for this.
But fissures and disagreements on some key issues such as the reform of parastatals are emerging, and experts say this is stalling progress.
Finance Minister Patrick Chinamasa said on Tuesday that the process to reform state enterprises such as Air Zimbabwe has not yet started. In fact, cabinet has not yet finalised deliberations on this issue.
“Pending finalisation of the consolidated proposed reform programme and submission to cabinet… I would request interest parties to direct their expressions of interest to the relevant line ministry for initial consideration and valuation,” Chinamasa said in a lengthy statement.
This was in stark contrast to what his deputy Terence Mukupe said earlier this month, and appeared to be in response to what his Treasury colleague had said. Mukupe had said that the government was putting some state-owned firms up for sale.
“We are diluting our shareholding in those entities and our shareholding might go to zero percent in some entities,” Reuters quoted Mukupe as saying.
Hoax tender invitation
His statement coincided with the circulation on social media of a hoax tender invitation by the government for companies to submit bids to acquire stakes in the state corporations. Chinamasa has also spoken against the hoax advert which listed eight state companies, most of which have been making losses over the years, in which the government was keen to offload its stakes.Advertisement

Ahead of his trip to Davos, where he is preaching a positive gospel painting Zimbabwe as open for business and investment, Mnangagwa told a gathering of business leaders that the process to reform parastatals will not be a rushed one. This appeared to be at odds with what his deputy finance minister had said.
“We need to realise that there is no need to rush decisions in that area of reforming state parastatals. We have to dialogue and make a decision. Some of the parastatals we will abolish, some we will capitalise and some we will privatise,” said Mnangagwa.
His critics have already found ammunition to colour his administration as not agreeing on key decisions and policy matters. Mnangagwa has in the past two weeks been visiting regional leaders in Mozambique, Angola and Zambia.
When Mnangagwa returned from his official visit to meet Zambian leader Edgar Lungu, he flew into a Zimbabwe debating the purging of 30 senior police officers, with social media platforms throwing in some jibes over this. But no sooner had the ink on the dismissal letters dried than the decision was reversed, with the list reduced from 30 to 9.
“Such things happen at the change of an administration and we must always budget for over-reaction. The key is to bring the train back on the rails with minimum disruption,” Mnangagwa’s spokesperson George Charamba told state media.
Speculation is already rife that some officials inside the government opposed to the Zimbabwean leader are pursuing a vengeful agenda to oust those aligned to former leader Mugabe and his wife Grace. When the military took over in November, it disempowered the police, long perceived to have been aligned to the ousted leader.
Confusion over cabinet ministers
While some are seeing glaring differences in decision making and policy issues, other observers believe this has all been a mediocre approach to running a government. But the critics say there have always been bleeps and blunders, perhaps disagreements and differences, with Mnangagwa having to disappoint two cabinet ministers, hours after their initial appointment.
The reason given was that the president had overstepped the number of ministers who can be appointed as non-constituency holding members. Under this provision, Mnangagwa appointed securocrats Sibusiso Moyo and Perence Shiri as Foreign Affairs and Lands and Agriculture Ministers respectively, as well as Winston Chitando – a former chairperson of Mimosa mine – as Minister of Mines, among others.
“It’s not a case of divisions or differences but just different viewpoints and preferences, but this will be handled and clarity will always be restored. We know people are already talking of negative issues about this government in terms of its cohesion, but it is far from the truth and ultimately we will see people pulling in the same direction,” a cabinet minister told Fin24 on Tuesday.
Apart from this, there have been policy pronouncements around the continued use of bond notes from government officials that have forced Chinamasa to reaffirm the government position to continue using the local bond notes.
But despite the policy differences, there is information from government officials and business sector executives showing interest from investors in deals to partner the government. However, this will not happen in the short term.
Transnet’s $400m deal to capitalise the National Railways of Zimbabwe is yet to sail through, but expectations are that Mnangagwa is keen to have it finalised.
* Memory Mataranyika is a Zimbabwean correspondent for Fin24. This article is taken from Fin24.com