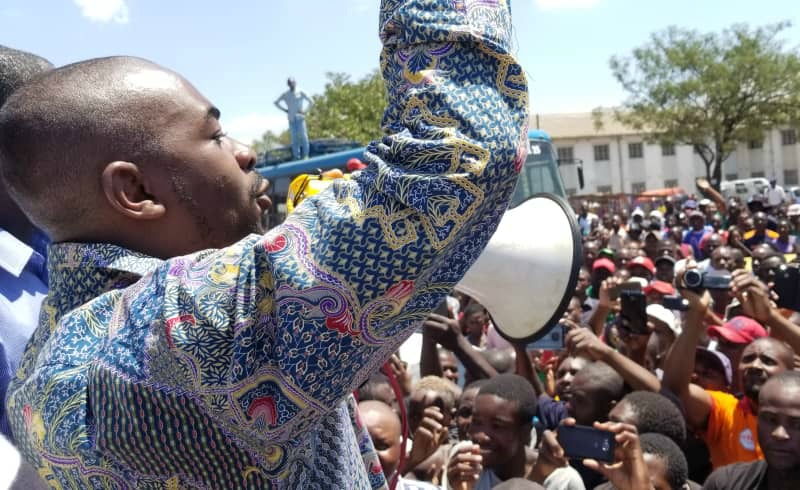 MDC leader Nelson Chamisa has accused President Emmerson Mnangagwa of gross economic mismanagement that has seen him “rig” the 2018 Christmas and leaving locals too poor to enjoy the world’s most celebrated festival.

“Christmas again this year has been rigged,” he said to cheering crowds and onlookers during a surprise Monday visit to Mbare Musika long distance bus terminus.

“Some are not even able to travel to the rural areas because there is no money or there is no transport.”

Chamisa had gone to meet and hear the concerns of those who were travelling to different parts of the country for the Christmas holiday.

“It’s very difficult to even share anything because people have nothing. There is no money in the pockets, people have no goods or products in the shops and you know that it is difficult to have a Christmas without soft drinks,” he said, adding that he was taken aback by sharp fare increases with a Murambinda, Masvingo trip which cost $7 in September this year, now $50.

Chamisa said the ongoing cash and fuel shortages, coupled with endless queues as well as a prolonged strike by doctors, have all contributed to the worsening plight of suffering Zimbabweans.

He added, “We have also seen that teachers have difficulties; they have not had an adjustment of their salaries, yet prices have gone up five times.

“This kind of situation is supposed to be stopped. That is why 2019 is a year of changing our fortunes, a year of taking the destiny of our future into our own hands.”

Chamisa said only dialogue between government and his party could remedy the national crisis.

“To all Zimbabweans, let this be the last Christmas with such difficulties. We need to make sure that there is political dialogue in the country, we resolve all the pertinent issues that are affecting the country,” he said.

However, President Mnangagwa has repeatedly dismissed any prospects of finding common ground with his nemesis, saying that he was enjoying the mandate given to him and his party through the July 30 elections.