NEW evidence linking President Emmerson Mnangagwa to the controversial Drax International has emerged with a recent video and pictures showing the Zimbabwe leader in various engagements with the company’s officials.

Early this month, Zanu PF acting spokesperson Patrick Chinamasa threatened to deal with local journalists and citizens who linked Mnangagwa’s family to Drax International. The company, fronted in Zimbabwe by Delish Nguwaya, is at the centre of an alleged Covid-19 kit US$42 million tender scam.

Nguwaya was arrested last Friday facing fraud charges and is expected back in court this Tuesday for the continuation of his bail application.

However, Chinamasa and Zanu PF have absolved Mnangagwa of any dealings with shady Drax International, but new evidence shows that the president was in constant contact with the company despite its corrupt links and how it used its proximity to get tenders after failing to secure security clearance from the Central Intelligence Organisation (CIO).

In one video, Mnangagwa is confirming how he appealed and received donations worth US$60 million from Drax to support the country’s Covid-19 operations.

“I am happy that after my personal appeal to Drax, they have done tremendous donation to support the mobilisation effort we are making currently,” Mnangagwa is seen saying at the State House.

“They have donated US$60 million to us to procure medicines and equipment and they have also donated a number of drugs.”

However, no drugs were delivered, and instead, Drax International was awarded a US$42 million tender to supply drugs to the Zimbabwe government to fight Covid-19.

It has also emerged that Drax International is only a consulting company and not a pharmaceutical firm as Mnangagwa and his ministers want the nation to believe.

The company, which claims to be domiciled in Switzerland, is owned by one Drax from Albania who was recently in Zimbabwe and met Mnangagwa and other senior government ministers and officials including Finance Minister Mthuli Ncube and Health Minister Obadiah Moyo.

It has emerged that Moyo knew that Drax was a middleman and lied about that in his statement claiming the company was into pharmaceuticals. 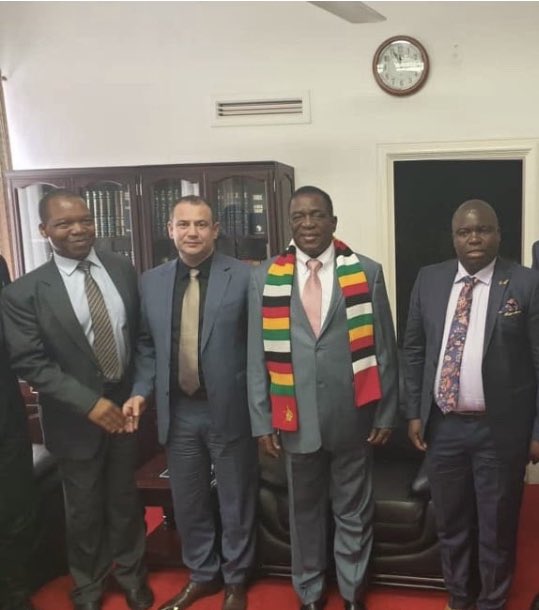 The matter in which Nguwaya has been arrested only came to light after a notable variance on prices charged by Drax International LLC to those prevailing on the market.

According to the State, sometime in 2019, Nguwaya, having connived with one IIir Dedja who is still at large, tendered an expression of interest in the supply of medicines through a US$20 million loan facility under a company called Papi Pharma and it was turned down after a vetting process by the relevant government department.

The letter was allegedly addressed to Health minister Moyo.

Acting on the misrepresentation, Moyo initiated a process through his then permanent secretary Agnes Mahomva which involved communication among all the relevant stakeholders which included the ministry of health, ministry of Finance, Procurement Regulatory Authority of Zimbabwe (PRAZ) and NatPharm culminating into a contract of supply of medicines and medicinal products between NatPharm and Drax Consult SAGL.

Having entered the contract through fraudulent means, the two, using Drax Consult SAGIL then supplied medicinal products worth US$2 million to the ministry of Health through NatPharm.

“The accused person’s conduct was unlawful and caused prejudice to good administration to the Zimbabwe Government as the government officials acted on the misrepresentation to process contract papers,” said the state.

On the second count, Nguwaya having been successful on the first count, he tendered another expression of interest to supply medicines worth US$40 million but this time using a slightly different company called Drax International LLC.

Based on the trust of the previous engagement, the government entered into a contract with Drax International LLC for the supply of medicines worth US$40 million.