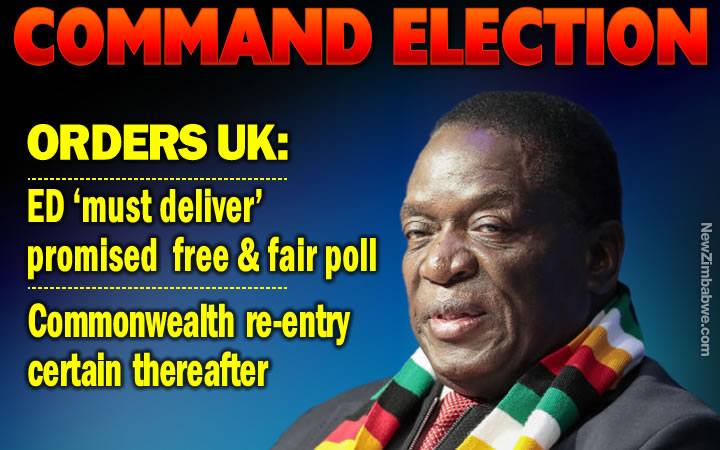 PRESIDENT Emmerson Mnangagwa’s government “must deliver the free and fair elections” that it has promised, Britain said Friday.

A Reuters report said British Foreign Secretary, Boris Johnson, speaking on the sidelines of the Commonwealth Heads of Government Meeting, said July’s election will be a bellwether for the direction of a new Zimbabwe.

“The Zimbabwe government must deliver the free and fair elections the people of Zimbabwe deserve and which it has promised,” he said.

“President Mnangagwa has been in power for 150 days and while Zimbabwe has made impressive progress, there is still much to do,” Johnson said. “That’s why Britain, the Commonwealth and the wider international community will do everything it can in supporting Zimbabwe on its path of reform.”

“The UK stands ready in friendship to support a Zimbabwe that fully embraces the rule of law, human rights and economic reform,” Johnson said.

Earlier on London, in a statement, said Zimbabwe was welcome back into the Commonwealth and Britain would strongly support the move.

“The UK would strongly support Zimbabwe’s re-entry and a new Zimbabwe that is committed to political and economic reform that works for all its people,” the Foreign Office said in a statement.

Mugabe pulled Zimbabwe out of the 53 member Commonwealth club in 2003 after the quarrelsome leader was widely criticised for human rights abuses associated with his violent land grab and elections.

The EU and the US slapped Mugabe and his close associates with sanctions over a range of accusations including electoral theft and violence against opposition members.

Mnangagwa has, however, said his government will invite Western powers to monitor the forthcoming elections expected in few months’ time. That would be the first time for western monitors to be allowed into Zimbabwe in nearly 20 years.

Mnangagwa will face MDC Alliance’s Nelson Chamisa who took over from the late Morgan Tsvangirai who died in February this year after a long battle with cancer.

Chamisa has complained about government’s unwillingness to commit itself to ensuring the election will be free and fair.