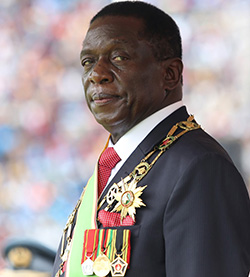 AS the body of Zimbabwe’s main opposition leader awaits repatriation home for burial, his party already faces nasty power struggles to replace a man praised by both allies and rivals for his tenacious fight for democracy.
That fractured opposition gives President Emmerson Mnangagwa a virtually clear road to winning the first post-Robert Mugabe election in the months ahead.
After the death of Morgan Tsvangirai on Wednesday in neighboring South Africa after a battle with cancer, three deputies in his Movement for Democratic Change party are vying to succeed him. Tsvangirai had been the MDC-T’s only leader since its formation in 1999.
A day after his death, thousands of mourning supporters gathered outside party headquarters while its leaders met to choose deputy party president Nelson Chamisa, a charismatic 40-year-old, as Tsvangirai’s replacement “for the next 12 months.”
But complications emerged immediately as the other deputy presidents, Elias Mudzuri and Thokozani Khupe, as well as several other senior officials boycotted the meeting. After violence from party youth, they abandoned plans for their own parallel meeting at Tsvangirai’s home.
Some party members are disputing Chamisa’s appointment, saying Mudzuri, who was acting leader for a while as Tsvangirai underwent treatment, or Khupe is the MDC-T’s acting leader or rightful heir.
The opposition party once posed the sternest challenge to former leader Mugabe and his ruling ZANU-PF party since the southern African nation’s independence from white minority rule in 1980.
But with Tsvangirai gone, his party seems headed for an uncertain future at a time when a chance to seize power after Mugabe’s departure approaches. Mugabe, who led Zimbabwe for 37 years, made a dramatic resignation in November after the military moved in and inspired the ruling party to turn against him.
Now Mnangagwa, Mugabe’s longtime ally, is in charge and is reaching out to the international community after years of sanctions over alleged human rights abuses and rigged elections, hoping to bring in badly needed foreign investment to revive a collapsing economy.Advertisement

The United States, Britain and others have made clear that holding credible elections in the coming months is key to those efforts. The constitution says elections should be between July 23 and Aug. 21, though Mnangagwa has hinted they could be held earlier, perhaps in May.
A day after Tsvangirai’s death, Mnangagwa expressed condolences and said the upcoming elections must be free and fair “in tribute to him.”
Even as some in Zimbabwe worry that Mnangagwa is merely a continuation of Mugabe’s administration and express concern about the military’s influence on government, the opposition struggles to come up with a united challenge.
“The time for power struggles is over,” Chamisa told the thousands of MDC-T supporters Thursday in the capital, Harare. “Mudzuri and Khupe should unite behind our efforts to remove ZANU-PF.”
Some in Zimbabwe said the opposition’s public displays of discord are disrespectful of Tsvangirai, who was jailed, beaten and accused of treason in his years of resisting Mugabe’s government and even became prime minister in an uncomfortable coalition government for a few years.
“One of the most glaring ironies of this moment is that those who fought him are showing him respect while those with fought with him are fighting each other and showing disrespect. Comrades, you are allowing power to get in the way of reason and dignity,” tweeted Alex Magaisa, a law lecturer at Kent University in Britain and former adviser to Tsvangirai.
The upcoming election will be the first without Tsvangirai since 2002. An opposition alliance had endorsed him as its candidate, even as the ailing leader in January said he was “looking at the imminent prospects of us as the older generation leaving the levers of leadership to allow the younger generation to take forward this huge task.”
In the end, the opposition leader made the same mistake that Mugabe did, political analyst Alexander Rusero said: Even as his health deteriorated Tsvangirai failed to “anoint” a successor.