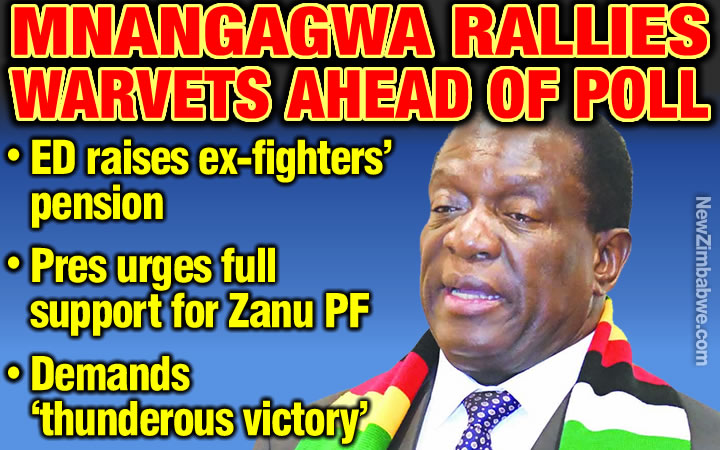 Addressing hundreds of war veterans in Harare, Friday, Mnangagwa was harangued with a litany of complaints around the just ended primary elections.

“Let me assure you that my government is committed to fulfilling its obligations to our veterans so that you can live a life of dignity.

“My government has already made a decision to increase allowances of war veterans and putting in place necessary social safety nets,” Mnangagwa said to applause.

Mnangagwa, who took power after a military coup forced former President Robert Mugabe to resign last year, consistently called for the respect of the country’s Constitution.

Mnangagwa paid tribute to war veterans for “resisting the devious machinations of the G40 cabal”.

“Let not the difficulties we endured during the period of State capture by the G40 cabal revisit our country. Never again! Never again,” said Mnangagwa.

He called for a united front in order to rebuild the country after decades of stagnation under Mugabe.

“The task before us is to rebuild our economy and realign our politics with current imperatives without deviating from our founding principles of our party as well as chart a better future for our children. It will not be achieved by a select group of people but all Zimbabweans without no matter their tribe, gender or status,” Mnangagwa said.

Mnangagwa described his meeting with war veterans as a gathering of comrades with none “more important than the other.”

“I am a servant of the people. I am your servant and I am a listening President,” he said.

Mnangagwa urged war veterans to play a central role in campaigning for Zanu-PF ahead of elections due in July or August.

He called for them “to go out full throttle in our huge numbers and campaign for a thunderous victory.”

“We must win the hearts and minds of our people,” he added.