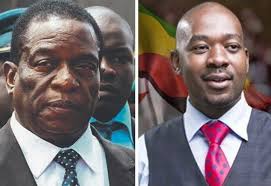 PRESIDENT Emmerson Mnangagwa has made an indirect call to his MDC rivals to unite with his party, Zanu PF, in the interest of a hugely divided nation.

He said this in a statement to mark 32 years since the signing of the legendary Unity Accord between liberation war movements, Zanu and PF Zapu on 22 December 1987.

“Zimbabwe needs all its hands; black or white; long or short; tender, clean or greased; fisted or open. All these hands belong to our nation which today bids them to work for it, and in unity and harmony,” the President said.

A fisted hand is synonymous with Zanu PF while an open palm is linked to the MDC. Mnangagwa and the MDC president, Nelson Chamisa have been at loggerheads since the presidential results of the July 2018 elections were announced.

Chamisa accuses the Zimbabwe Electoral Commission (ZEC) of rigging the election in favour of Mnangagwa. The standoff between the two rivals has been blamed on the serious economic challenges facing the country.

But in his Unity Day message, Mnangagwa said it was never too late to serve the people and the country.

“We have created channels and avenues for resolving our differences and sharing ideas on challenges we face as a nation. It is never too late to serve your people and country.

“A divided house soon crumbles and falls. We should never entertain politics which mobilise around narrow, anti-nation sentiments,” he announced.

“We must therefore always seek to be more peaceful and more united through greater interaction, greater justice and more balanced development.”

He said the desire to govern should not be a licence to divide the nation.

“Our Constitution bids that we hold elections after every five years. With elections comes contestation; however, these must never be aggressive or divisive rivalry. Democratic contestations should never destroy our national cohesion.

“The quest to govern is neither a license to divide. Our politics must never fracture our nation or threaten to break it up. Our politics must affirm our nation by always advancing, productivity, economic development and prosperity for all our people. That is which is in the best interest of the people must beacon.”

Mnangagwa added that only a united Zimbabwe which is at peace with itself becomes a useful member in Africa.
“We owe it to ourselves, but also owe it to our African brethren,” the President said.

His message comes when Thabo Mbeki, the former South Africa President is angling process for a dialogue between Mnangagwa and Chamisa. Mbeki was in the country last week and is expected back in Zimbabwe after Christmas to continue with the negotiations between the two.