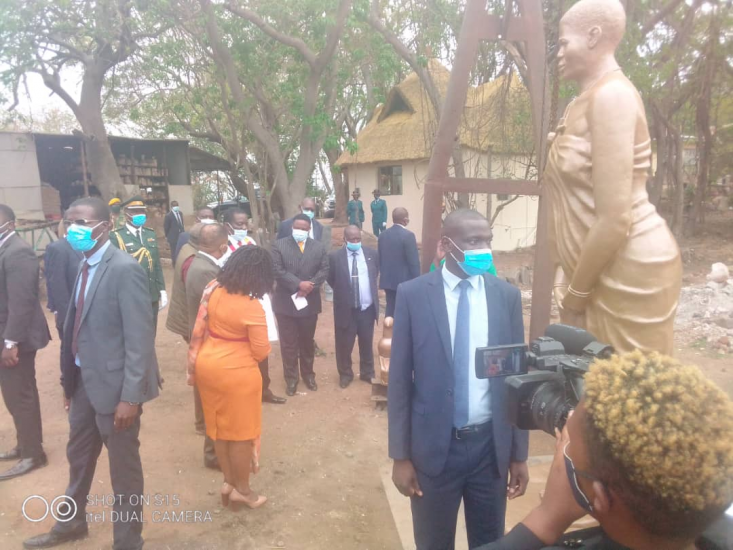 THE controversial statue of the First Chimurenga heroine Mbuya Nehanda, which recently caused public outrage and set social media ablaze as it depicted a modern woman, will have to be redone to capture her correct image.

Mbuya Nehanda was hanged in 1898 and President Emmerson Mnangagwa is constructing a site in central Harare where the statute will be placed.

However, Mnangagwa was unhappy with what he saw and according his spokesperson George Charamba, he disapproved the statute and ordered Mutasa to go back to the drawing board.

“When you have that kind of artistic production, there are key features which must ensure that onlookers immediately connect with. One key feature has to do with the physical appearance of the real life figure you are talking about,” said Charamba told state media Friday.

“So the President immediately reacted. He wanted to understand why artistically, VaMutasa has decided to make (Mbuya) Nehanda look a lot more youthful. Then it emerged that VaMutasa had done something that approximated Nehanda in life. But the authorities at the National Museums and Monuments had a different view. They thought the artistic production must convey and communicate vigour, permanence, youthfulness of the spirit which Nehanda incarnates or personifies.”

According to Charamba, National Museums and Monuments officials then suggested that Mbuya Nehanda be made a lot younger to suggest that buoyancy which they wanted to communicate to the onlooker.

“The President didn’t agree, and as it turns out that youthful face of Nehanda should be put away and we will have a Nehanda who is closer to how the good lady looked in real life, which means a lot more wrinkled, well past middle age, and of course showing the strains and stresses of captivity,” added Charamba.

Mbuya Nehanda’s statue will be erected at the intersection of Samora Machel Avenue and Julius Nyerere Way.