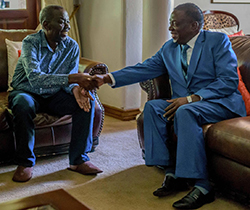 PRESIDENT Emmerson Mnangagwa says the late MDC-T leader Morgan Tsvangirai will be remembered for his political maturity after partnering the ruling Zanu PF party in forming a unity government following the disputed and violent 2008 elections.
Tsvangirai, who had been battling colon cancer since 2016, passed on Wednesday evening at a South African hospital where he was receiving treatment.
“A strong trade unionist and opposition leader, the late Tsvangirai will be remembered especially for his readiness to stretch and reach out across the political divide for a Government of National Unity after the polarising 2008 elections,” said Mnangagwa.
“Both in and after the Government of National Unity, he remained a national figure who obdurately insisted on free, fair, credible and non-violent elections as a way of strengthening our democracy and our overall reengagement with the rest of the world.”
Despite handing then President Robert Mugabe a first-round defeat in the 2008 election, Tsvangirai agreed a marriage of convenience with his rival after boycotting the run-off vote claiming that hundreds of his supporters had been killed through state sponsored thuggery.
The opposition leader served as Prime Minister during the coalition government which was negotiated by former South Africa president Thabo Mbeki under the Global Political Agreement.
Meanwhile, President Mnangagwa also revealed that consultations were ongoing in government and with the Tsvangirai family for a befitting honour for the late veteran politician.Advertisement