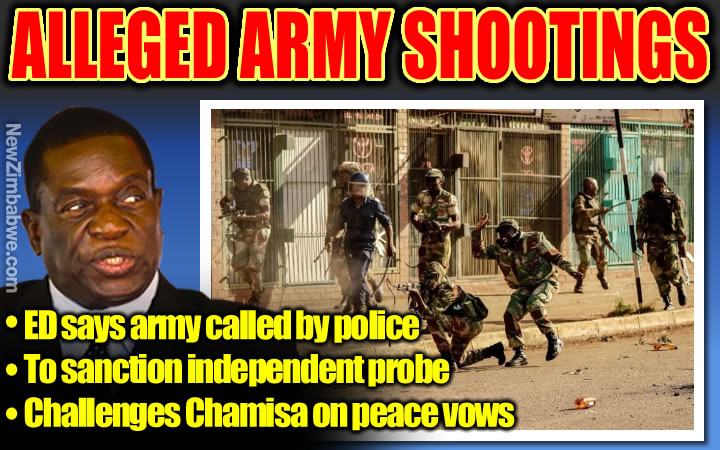 ZIMBABWE’S President-elect Emmerson Mnangagwa says his government would engage foreign experts to assist locals in investigating Wednesday’s killing of six civilians and the injury of a dozen allegedly by the army.

He was addressing the media at State House Friday evening.

Mnangagwa had been asked by the media on what action his government would take to deal with the much-condemned killing of unarmed civilians.

Some army personnel was deployed into central Harare Wednesday to quell violence which broke out among suspected followers of the MDC Alliance who took to the streets to vent their anger over what they strongly felt was an electoral loss engineered by Zanu PF rigging.

Commenting on the deployment of the military on affairs which concerned the police, Mnangagwa said it was within the mandate of the military to assist law enforcement agents in dealing with a situation he said was going out of control.

“The police were overwhelmed, and they summoned as required by the constitution, assistance from the army to stop the destruction of property in the violence that erupted,” he said.

In the wake of the violence, the country’s newly elected leader urged peace and unity and also called on his main election rival, Nelson Chamisa of MDC Alliance to embrace the spirit.

“Let us call for peace and unity in our land, call for both louder than ever. That is the role of leaders, that is our joint responsibility,” he said.