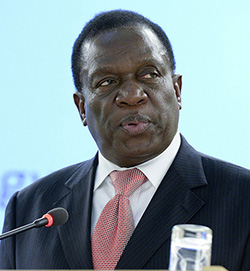 PRESIDENT Emmerson Mnangagwa says he will soon convene an all-party consultative meeting on free and fair elections ahead of the harmonised polls slated for this year.
The Zanu PF leader confirmed the development in a condolence message over the passing of MDC-T leader Morgan Tsvangirai who succumbed to colon cancer at a South African hospital on Wednesday.
“As part of building political consensus in the country ahead of the harmonised elections, I shall soon be inviting leaders of all political parties for a day long consultative meeting,” he said.
“Indeed, the ethic of overarching collaboration above fair and peaceful political contestation must be cultivated and entrenched into our national politics for all times.”
Mnangagwa is set to proclaim election dates anytime from now having promising to do so after earlier this month following the conclusion of a voter registration blitz.
At least 75 political parties have registered to contest in the 2018 elections, according to the Zimbabwe Electoral Commission.
Since helping form the MDC-T and growing it into the country’s biggest formidable opposition party, Tsvangirai has over the years pressed the ruling Zanu PF party for reforms that would help ensure free and fair elections.
Under former president Robert Mugabe, the ruling party insisted that it would never “reform itself out of power”.
However, Mnangagwa, who took over power after the military toppled Mugabe last November, has repeatedly insisted that his government would ensure a credible ballot this year.Advertisement