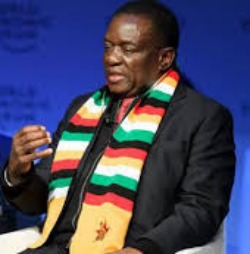 Despite Donald Trump reportedly dismissing African nations as “shitholes”, president Emmerson Mnangagwa said on Wednesday he would welcome the US president to build a golf course in his country.
“If President Trump came here today when I am still around I would… say: ‘Oh, Mr President, Zimbabwe is open for business’,” President Mnangagwa said at the World Economic Forum in Davos.
“I know Americans like to play golf – come and build golf courses… build hotels, I will give you incentives,” he added. “We are open and we want to catch up with the rest of the region.”
He was replying to a question about reported remarks by Trump earlier this month in which the US president allegedly complained about opening borders to immigrants from “shithole countries”.
Mnangagwa took office in November after a shock military takeover led to the resignation of long-time president Robert Mugabe.
In his appearance at Davos, he promised to hold a fair vote and to accept the result if he loses.Advertisement