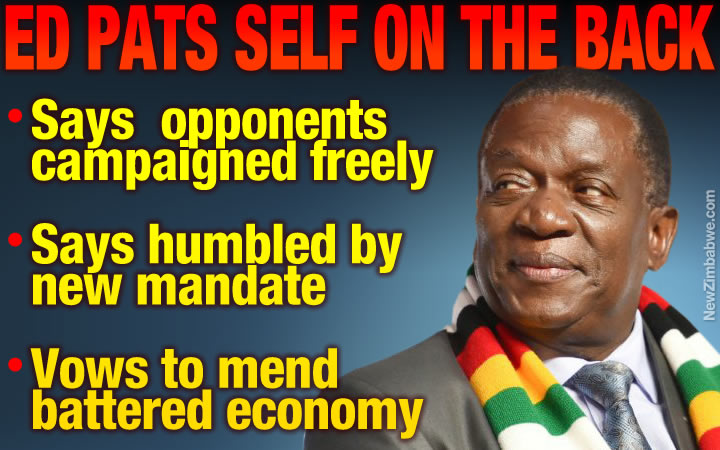 PRESIDENT-elect Emmerson Mnangagwa, whose electoral victory is being challenged in Zimbabwean courts, on Friday told his SADC peers he was elected cleanly in an election in which all his challengers were allowed to campaign freely.

He was speaking in his maiden speech address to Head of States and Government at the 38th SADC summit meeting in Windhoek, Namibia.

“All political parties were free to campaign in all parts of the country however they saw fit,” he said, adding that he led the campaign for peaceful elections in the country.

“This saw an unprecedented number of people freely exercising their democratic right to elect leaders of their choice in the spirit of transparency and openness.

“Our elections were held in the full glare of a broader spectrum of international observers and global media.”

Mnangagwa polled 50,8 percent of the national vote while his closest challenger, Nelson Chamisa of MDC Alliance got 44,3 percent.

The state leader’s victory is being challenged by Chamisa who insists the incumbent connived with the Zimbabwe Electoral Commission to steal his victory.

The hearing in the matter has been set for August 22 at the Constitutional Court.

However, that has not stopped the state leader from telling all and sundry he was duly elected to his job.

“I am deeply humbled and honoured by the people’s show of confidence in me and exceptional mandate conferred on my party Zanu PF,” he said in his speech.

“I am determined to draw inspiration from their collective hopes and dreams and trust imposed on me to work tirelessly as a servant leader to improve the quality of life of our people.”

While many especially in the opposition feel that the country has deviated from its democratic path revived by the November ouster of the country’s dictatorial leader Robert Mugabe, Mnangagwa feels otherwise.

“The 30 July 2018 harmonised general elections represented maturing entrenchment of democratic and values of my nations,” he said.

Millions have left the country for greener pastures among SADC countries and beyond.

Mnangagwa pledged to revive the country’s economy during his new tenure.

“For many years, Zimbabwe suffered from isolation and stagnation. To this end, we are committed to comprehensive economic reforms cognisant of the regional and continental development trajectory.

“We have also set out to engage and re-engage with international community with the view to pursuing strategic partnership with the quest to be part of the global family guarded by our mantra Zimbabwe is Open for business.”

“In all these endeavours we continue to count of support and solidarity we have always received from SADC.”