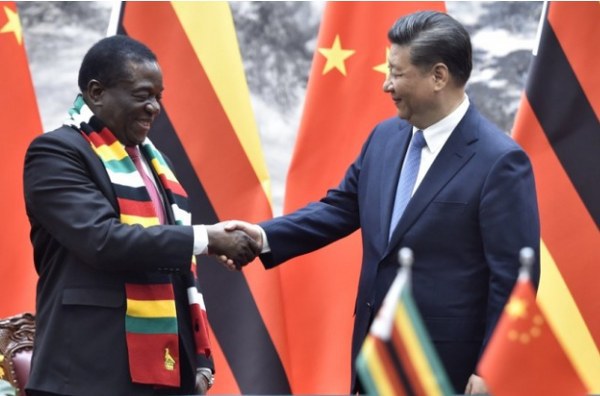 Zimbabwe’s President Emmerson Mnangagwa thanked Chinese President Xi Jinping on Tuesday for Beijing’s political support and pledged to strengthen ties with the Asian giant on his first visit since his dramatic rise to power last year.

Xi welcomed Mnangagwa to Beijing when they met following a formal welcoming ceremony at the Great Hall of the People.

“You are an old friend of China and I appreciate your efforts to develop relations in all areas,” Xi said in opening remarks. Xi praised Mnangagwa’s efforts to “improve people’s lives” in Zimbabwe, though he did not go into specifics.

“As Zimbabwe’s good friend and partner, we are very happy about this,” Xi said.

Ahead of an election scheduled for August 2018 at the latest, Mnangagwa is under pressure to bring back foreign investors and resolve a severe currency shortage, mass unemployment and dramatic price increases.

Mnangagwa, who along with members of his delegation wore a scarf in the colors of Zimbabwe’s flag, thanked Xi for his reception and recalled his military training in China in 1963-64. In the 1960s, China helped train and supply guerrilla fighters from the Zanu’s military wing in the fight for liberation. Mnangagwa, 75, was part of that effort after he joined the fight against white minority rule in then-Rhodesia.

Mnangagwa congratulated Xi on his re-election as president and on the establishment of his political theory, simply referred to as “Xi Jinping Thought.”

“I will take this mantra to Zimbabwe and hope to develop some socialism in Zimbabwe with Zimbabwean characteristics,” Mnangagwa said.

The trip is Mnangagwa’s first since longtime leader Robert Mugabe resigned in November under pressure from the military. Mugabe’s government maintained warm relations with Beijing but was accused of widespread corruption.

Some of that ill-gotten wealth was reported to have gone through China, which became increasingly enmeshed with Zimbabwe’s government and economy as Western nations withdrew over human rights concerns and mismanagement of the once-prosperous country.

Among those projects is the 300 megawatt expansion of the Kariba South by China’s Sinohydro in a deal worth hundreds of millions of dollars.

Chinese companies were also major players in Zimbabwe’s diamond fields until the government canceled all licenses to make way for a state monopoly in 2016.

Since then, Zimbabwe has continued to face huge economic challenges, including severe cash shortages and dramatic increases in the price of food and other household items that have prompted it to look to China for loans and investment.

At the time of Mugabe’s resignation, China said it still considered him a “good friend” who “has long been committed to friendship between China and Zimbabwe.”

However, questions were raised as to whether China had played a role or been notified in advance of the move against Mugabe because of a visit days before by Zimbabwe’s army commander at the time, General Constantino Chiwenga, to Beijing.

Analysts said China had increasingly considered Mugabe a liability. Beijing has said only that Chiwenga’s visit was a “normal military exchange.”

Zimbabwe is among the African countries targeted by China’s trillion-dollar “Belt and Road” initiative promising roads, ports, and other infrastructure. That’s widely seen as providing the continent’s economy with a much-needed boost, although some have questioned the long-term ability of recipient nations to pay for the projects.

Most recently, the United States has sounded the alarm that the Chinese money flooding Africa risks bringing dependency, exploitation and intrusion on nations’ basic sovereignty.