PRESIDENT Emmerson Mnangagwa on Sunday toured some high-density suburbs in Harare and Chitungwiza to have a feel of the effectiveness of his government’s 21-day lockdown to control the spread of coronavirus.

Zimbabwe on Sunday entered Day 7 of the national lockdown with most citizens still confined to their homes during the unprecedented period.

“The President was amazed by the level of responsibility by Zimbabweans,” Information ministry permanent secretary Nick Mangwana later told NewZimbabwe.com. 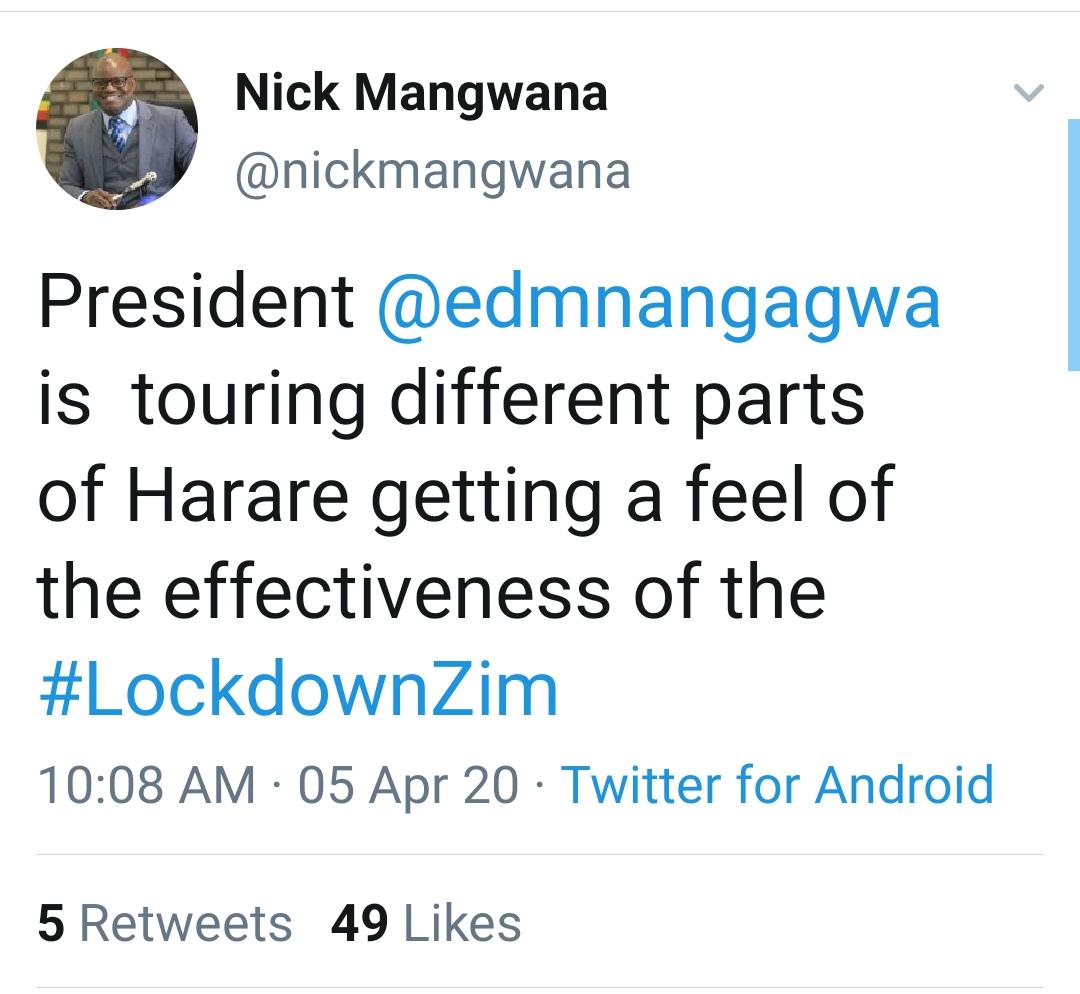 Mangwana was among government officials who accompanied Mnangagwa to tour Harare’s Mabvuku, Tafara, Kuwadzana, Mufakose, Budiriro, Glenview as well as Zengeza in Chitungwiza.

He continued, “There was no police detail, no people in the streets, market stalls were empty and virtually there was nothing except a few people who were queuing for water at boreholes who even respected the social-distancing principle as they waited for their turn to come.

“His (Mnangagwa) wish is for people to maintain the discipline shown over the past seven days.

“The President wanted to see for himself what was happening in these areas but his body language showed he is not yet in a position to make a judgement on either to extend the lockdown or not.

“He does not want to pre-judge, disinclined to say something at this moment unless there is a massive need to do so.

“Remember there are social and economic issues to consider and all that is being looked at by the ministerial taskforce (on Covid-19).

“The President understands that some people are not copying.”

Meanwhile, the Vice President Constantino Chiwenga led ministerial taskforce on COVID-19 is set to meet this Monday to review the situation.

Mangwana said the taskforce is comprised of nine committees which discuss issues and make recommendations to the President.

“Remember on lockdown, Zimbabweans called for it and it was a consensus reached by everyone to save our lives. We are concerned about saving human life,” he said.

Zimbabwe still has nine Covid-19 confirmed cases and a single related death since the first case was reported over two weeks ago.

President Mnangagwa last week warned locals against being hoodwinked by the small numbers recorded in Zimbabwe so far adding that the approaching winter season would mostly likely come as a big test to the country as coronavirus thrives in cold temperatures.

The President said his government has since decentralised operations in all health institutions to cater for everyone.