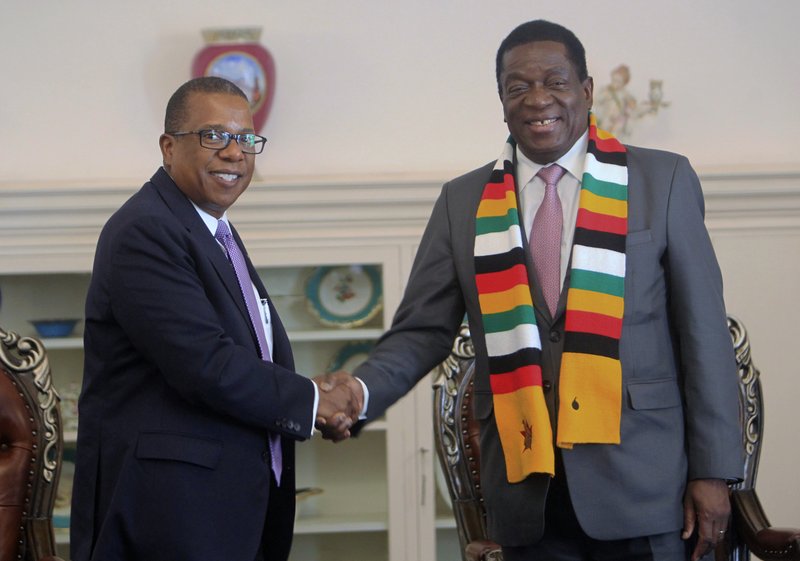 THE US embassy in Harare has reacted angrily to continued suggestions by government that President Donald Trump’s sanctions on Zimbabwe are hurting ordinary citizens.

Since the enactment of the Zimbabwe Democracy and Economic Recovery Act (ZDERA) in 2001, authorities in Harare and Washington have heckled over the effects of what successive US leaders claims are measures targeted at individuals.

Former President Robert Mugabe until his removal from power by coup in November 2017 accused the US of adopting covert means to elbow him out of office. His successor President Emmerson Mnangagwa who came to power on the back of what he called military assisted transition initially declared he would not blame sanctions for Zimbabwe’s economic problems but now seems to have changed tune.

The Zanu PF leader has found willing cheerleaders in the region and beyond including Sadc and the African Union who have all called for the “unconditional lifting of sanctions on Zimbabwe” because they are hurting ordinary citizens.

But the US embassy in Harare took to twitter, Thursday to hit back.

“The US does not maintain comprehensive sanctions against Zimbabwe. Suggestions that the US intends to harm the Zimbabwean people with sanctions are false and misleading,” the short statement said in part.

According to the embassy “…US targeted sanctions list: 84 individuals and 56 entities. People of Zimbabwe: 16 million +. Sanctions do not target the people of Zimbabwe.”

It added: “The US targets sanctions on those who engage in corruption, violate human rights or undermine democratic institutions, not the people of Zimbabwe.”

In the latest executive order renewing the sanctions on Zimbabwe, Trump said the southern African country remained a “threat to US foreign policy.”

“The actions and policies of these persons continue to pose an unusual and extraordinary threat to the foreign policy of the United States. For this reason, the national emergency declared on March 6, 2003 and measures adopted on that date, on November 22, 2005 and on July 25, 2008, to deal with that emergency, must continue in effect beyond March 6, 2019,” the statement read.

Foreign Affairs Minister Sibusiso Moyo in a statement said the renewal of the measures shows US’s lack of appreciation of what Mnangagwa has been doing in terms of reform.

“They (sanctions) affect the poor and worsen the economic conditions they are intended to correct…they should be removed as they are inhumane and an unnecessary setback to efforts to improve relations between nations.

“The government of Zimbabwe reiterates once more that the renewal of sanctions on the country is tantamount to a political agenda setting and contrary to the spirit of re-engagement, the pillar of the otherwise thawing relations between the USA administration under President Trump and the new political dispensation in Zimbabwe under President Emmerson Mnangagwa,” said Moyo.

Critics argue the measures are used by the US to paint Zimbabwe in bad economic and political light while stifling the country’s ability to attract investment as well as placing hurdles in the international finance system.