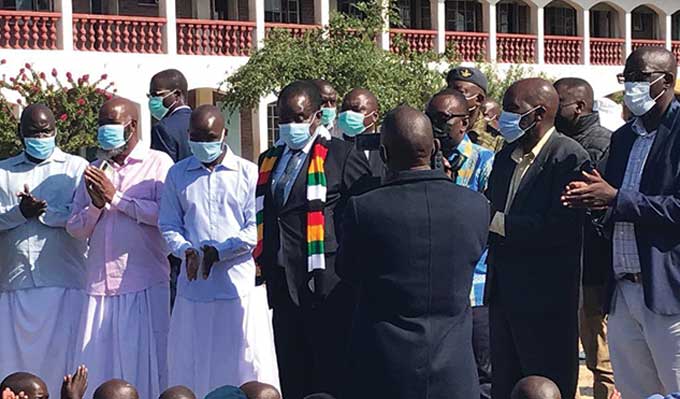 This was his first visit to Marange following the demise of the sect leader Noah Taguta last month.

After the death Taguta, Mnangagwa assisted with a state-funded funeral presided over by Manicaland provincial affairs minister Nokhutula Matsikenyere.

“President Emmerson Mnangagwa privately visited us, it was a good visit and he met our current leader,” Muchimwe said.

“The President also visited St Noah Taguta College and had an inspection of the computers he donated recently and was impressed by the facilities at the college.

“The President also said the church should remain united after the death of our leader Taguta and we are going to remain united,” he added.

Noah Taguta was buried in a cave on Chinyamukumba mountain range.

Mnangagwa’s visit to Marange has been seen by analysts as an appeasement to a Zanu PF stronghold as the ruling party heads for the 2023 elections.

The Apostolic sect commands a huge following in the country and the late former President Robert Mugabe used to visit the Marange shrine every year during the sect’s annual Passover and this won him many votes.

Last year the apostolic sect members defied COVID-19 regulations and gathered in their thousands during the annual Passover.

The church is known for polygamy and child marriages.

However, divisions have continued to rock the church with the late Noah Taguta’s brother Clement seeking an interdict barring the church leader from being buried in Chinyamukumba mountain.