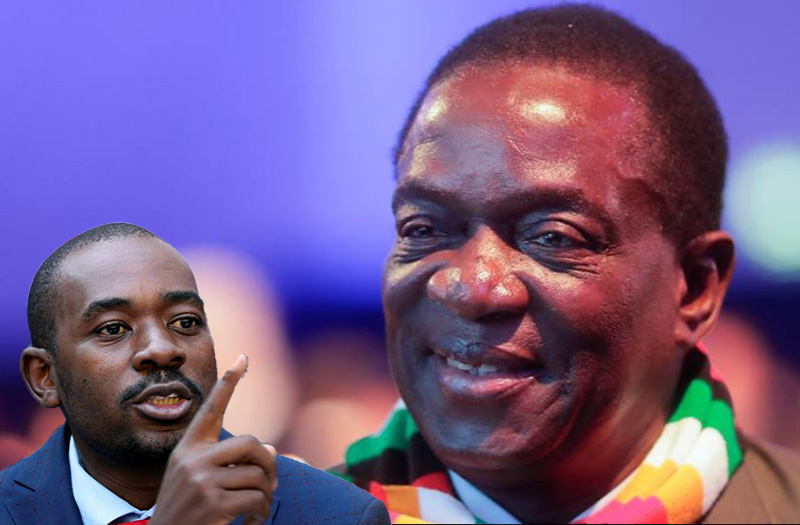 “HOW do I talk to him (MDC leader Nelson Chamisa) when he claims I have no legitimacy?” President Emmerson Mnangagwa asked Wednesday, responding to calls by his opposition rival for dialogue.

Chamisa has adamantly refused to recognise Mnangagwa’s victory in last year’s presidential elections, even after they were endorsed by the Constitutional Court.

The MDC leader argues that the legitimacy crisis around Mnangagwa’s presidency after the disputed poll is, in part, responsible for the country’s worsening political and economic problems.

Backed by civic society groups, Chamisa has been pushing for what he describes as a national dialogue to resolve, among other things, the “legitimacy” question.

However, opening up on the matter during a rare sit-down with private media journalists at State House Thursday, Mnangagwa said there was no basis for dialogue if his legitimacy was not recognised.

“We have heard about talks but I don’t know anything about it,” said the Zanu PF leader.

“I have had to ask my party officials whether they are negotiating behind my back.

“They have also said they are hearing of this from the media.”

He continued; “How do I talk to him (Chamisa) when he claims I have no legitimacy?

From what stand point do I begin to talk to him because, in his warped opinion, it means I do not have locus standi to talk to him.”

Since the disputed election, the situation in Zimbabwe has continued to deteriorate with pro-democracy groups fronted by the opposition MDC demanding reforms and a resolution of the country’s economic problems.

Mnangagwa argues that he is working hard to deal with the crises, adding he expected anger from citizens over his tough reform measures.

“I knew the austerity measures would make some people unhappy,” the president said Thursday.

“I am not President only to make people happy but to lead the country in the direction it ought to go.

“Some are angry because they don’t know the good results that these austerity measures will bring. We will continue to work.”