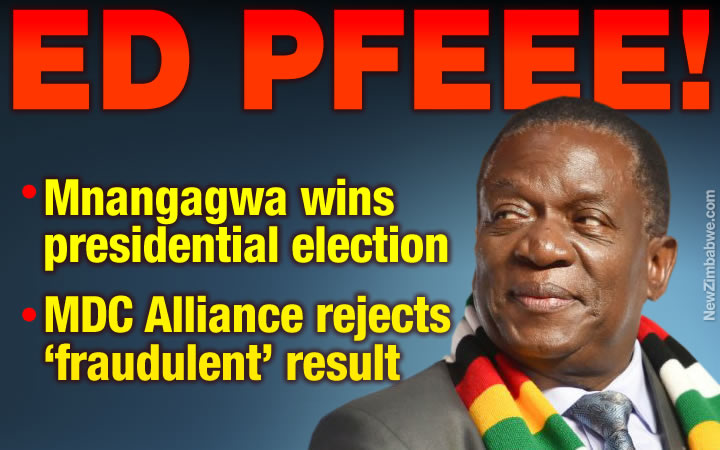 Mnangagwa won 50.8 percent of the vote, ahead of Nelson Chamisa of the opposition MDC party on 44.3 percent, the Zimbabwe Electoral Commission (ZEC) said.

Mnangagwa won by the smallest of margins, after needing more than 50 percent of the vote to secure victory without a second-round run-off.

He quickly took to Twitter to say he was “humbled” to have won the election, hailing it as a “new beginning” for the country.

“Though we may have been divided at the polls, we are united in our dreams,” Mnangagwa said on Twitter.

“This is a new beginning. Let us join hands, in peace, unity & love, & together build a new Zimbabwe for all!” Mnangagwa tweeted, after a week that began with peaceful voting Monday but spiraled into deadly violence in the capital Wednesday as the military fired on protesters.

Zimbabwe was braced for public reaction to the election results — the first since last year’s ousting of Mugabe — after a deadly crackdown on protesters.

Six people were killed on Wednesday when troops fired live rounds against MDC demonstrators alleging the vote had been rigged.

Soldiers and police cleared central Harare ahead of the results, shouting at pedestrians and traders to leave the area, as the opposition Movement for Democratic Change (MDC) repeatedly alleged that ZANU-PF was stealing the election.

Moments before the official announcement, MDC spokesman Morgan Komichi denounced the vote count as “fake” as he took to the stage at the ZEC results centre before being removed by police.

After Mnangagwa was declared the winner, he told AFP that his party rejected the outcome. “We will take this to the courts,” he said.

Police and army were on the streets of Harare overnight, but there were no reported protests and few public celebrations when the results were announced after midnight.

Turnout was high at over 80 percent in most of the country’s 10 provinces.

“What they have been trying to do of late is to play around,” Chamisa told reporters hours before the final results.

“That is rigging, that is manipulation, trying to bastardise the result, and that we will not allow.”

Monday’s vote was meant to turn the page on years of brutal repression under Mugabe, end Zimbabwe’s international isolation and attract foreign investment to revive the shattered economy.

Mnangagwa had promised a free and fair vote after the military ushered him to power when Mugabe was forced to resign in November.

Before the violence, European Union observers declared they found an “un-level playing field and lack of trust” in the election process.

Election observers from the Commonwealth issued a statement after Wednesday’s clashes to “denounce the excessive use of force against unarmed civilians”.

“It means our suffering will continue,” Emion Chitsate, a security guard at shopping centre in the Waterfalls district of Harare, said of the result.

“It’s the same ZANU-PF which brought us to where we are.”

Under Mugabe, elections were often marred by fraud and deadly violence.

The ZEC website was unable to publish results after it was hacked during the week.

Mugabe, 94, voted in Harare on Monday alongside his wife Grace after he stunned observers by calling for voters to reject ZANU-PF, his former party.

The campaign and polling day were lauded as relatively peaceful and open.

Mnangagwa was the clear election front-runner, benefitting from tacit military support and state resources. But Chamisa, a lawyer and pastor, sought to tap into the youth and urban vote.

Mnangagwa was allegedly involved in violence and intimidation during the 2008 elections when then opposition leader Morgan Tsvangirai pulled out of the run-off after attacks claimed the lives of at least 200 of his supporters.

The president must now tackle mass unemployment and an economy shattered by the Mugabe-backed seizure of white-owned farms, the collapse of agriculture, hyperinflation and an investment exodus.

Previously solid health and education services are in ruins and millions have fled abroad to seek work.