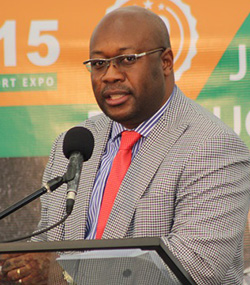 IN THE two-odd hours spent facilitating a “Zimbabwe is open for business” breakfast on the sidelines of the Mining Indaba in Cape Town, one got to appreciate that President Emmerson Mnangagwa’s finest appointment might just be his minister of mines.
The main attraction at the business breakfast co-hosted with the Moti Group – a 70% shareholder in African Chrome Fields along the Great Dyke in Zimbabwe – minister Winston Chitando represented the prospects of his country impressively.
Following the recent showing by his president at the World Economic Forum in Davos, Switzerland, Chitando gave the efforts to revive the economic prestige of Zimbabwe a massive boost.
Since the resignation of Robert Mugabe and the inauguration of Mnangagwa in late November 2017, Zimbabwe has frantically been wooing investors back; as well as reassuring those already invested to stay and up their stakes.
Not ever short of resources to sell, Chitando’s job was as easy as it was difficult in Cape Town.
Delegates to the Mining Indaba are miners who know their alluvium very well and are hard to fool. This is where Chitando shone.
First, he is a mining man. As one of the delegates – a German investor – plainly said: “It is good to have one of us running the show.”
The complications that sunk mining and the economy of Zimbabwe were not entirely due to the lack of industry knowledge, but political interference. That is how the Marange Diamond fields spawned grotesque tales of missing billions when the communities in the vicinity got no sniff of the action.
Chitando is an accountant by training. He has held various directorships in the industry, including being executive chairman and managing director of Mimosa Holdings, and holding different senior positions at Anglo American Corporation and Wankie Colliery Company. His experience as chairman of the Platinum Producers’ Association will stand him in good stead, since platinum and diamonds are the two strategic resources that still require the 51-49 compliance threshold. It is in these two that investors must co-own their operations with Zimbabweans, who will hold more than 50% of the shareholding.
He cited the “proposed amendments to the indigenisation laws and the endeavour to ensure that there is policy clarity”.Advertisement

The last part is what gets investors excited. Most entrepreneurs have no illusions that the conditions in the various jurisdictions are always going to the friendly; but they fare better when they know what the rules are – good or bad. Zimbabwe had not acquitted itself well on that score.
By stating categorically that the 51-49 threshold applies only to diamonds and platinum will make it easier for investors to decide if they are in or out.
But what about the protection of ownership rights? someone asked. He specifically referred to a case of Anglo American and Zimplats being forced to give up some of their assets over the years.
In response, the minister stressed that unless in the case of mining rights expiring, there would be no instance of his government arbitra- rily impounding assets.
Apart from the emphasis of consistency in the formulation and application of policy, the minister highlighted the vastness of the mineral resources in Zimbabwe, adding “we have more than 40 different minerals in abundance”. He particularly mentioned lithium as one of the minerals for which the country was closing investment deals.
When Mnangagwa was inaugurated on November 30, he modestly opened by stating that he possessed “no particularly unique qualifications” that set him apart from a deep pool of many able Zimbabweans. If he meant that he would be recruiting able technocrats like minister Chitando to flank him in navigating the transitional period until elections later this year, he should be able to achieve something significant in a short space of time.
The crucial condition is that the elections be held in 2018, as promised, or the current euphoria about the country could be in peril. However, judging by the reaction of the delegates to the minister’s presentation, Zimbabwe is probably back.
This artile is taken from South Africa’s Sunday Independent. Victor Kgomoeswana is the author of Africa is Open for Business; media commentator and public speaker on African business affairs, and a columnist for Destiny Man – Twitter Handle: @VictorAfrica