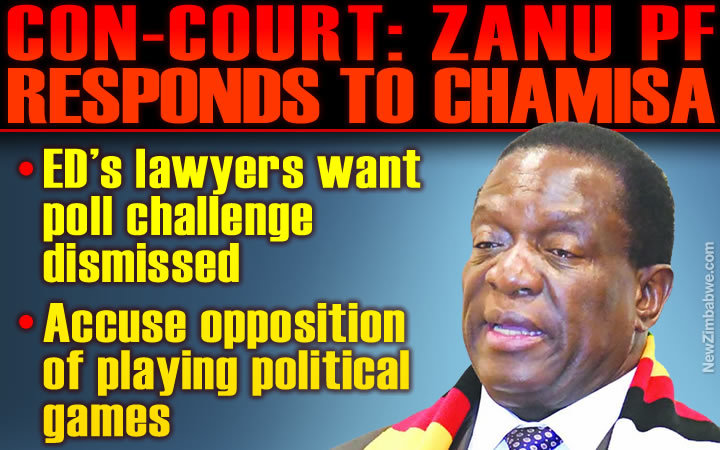 HARARE: Lawyers representing President Emmerson Mnangagwa have filed papers urging the  Constitutional Court to throw out an opposition challenge to his election.

The main opposition MDC party filed a legal challenge to the results on Friday alleging “gross mathematical errors” and calling for a fresh vote or a declaration that Chamisa was the winner.

On Wednesday, Mnangagwa’s lawyers dismissed the challenge as “political.”

“We are more than confident, there is no evidence of direct manipulation. This is a political gamesmanship.

“Let’s see if that evidence is admissible in court,” said Lewis Uriri, who is leading Mnangagwa’s team of lawyers, including some hired from neighbouring South Africa.

Chamisa’s challenge “has no legal merit,” said Paul Mangwana, a lawyer and the Zanu PF spokesman.

He added that they are confident the application by Chamisa would be thrown out for lack of merit and that Mnangagwa will duly be inaugurated after the court process.

However, Chamisa’s spokesperson Nkululeko Sibanda told  NewZimbabwe.com that Zanu PF has every reason to worry because the opposition has evidence to prove rigging.

“Zanu PF wants to throw the kitchen sink at us all the time, but this time around the evidence is there for the whole world to see and they will not get away with it,” said Sibanda.

“They realise they have nothing to prove their case and we are not worried about what they are saying now. We will meet in court and prove to them that we won. Why are they afraid anyway?”

Mnangagwa was forced to cancel an inauguration ceremony planned for last Sunday because of the court challenge. Zimbabwe’s law states that the court must rule within 14 days of the filing.

The case brings more uncertainty to a country that had hoped the peaceful vote would begin a new era but has been rocked since then by scenes of military shooting in the streets, in which six people were killed, and reports that opposition supporters have been harassed and beaten.

Some in the country have expressed doubt that the court will be able to remain neutral.

“I think the courts will have to prove to the people of Zimbabwe that they are weighing the facts of the case and considering them carefully and rendering an impartial judgment,” the U.S. ambassador to Zimbabwe, Brian Nichols, said Wednesday afternoon after meeting with Mnangagwa.