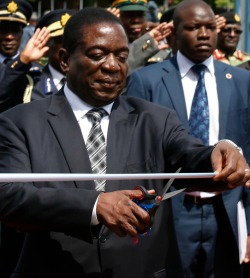 Emmerson Mnangagwa, the man who recently ousted Robert Mugabe as president of Zimbabwe after 37 years, will travel to Davos this week to tell the global elite that his country is “open for business”.
Deeply compromised as he is by years as one of Mugabe’s chief lieutenants, he deserves a hearing — but also a clear message that he will be judged by his actions, not his words.
Mnangagwa’s very appearance at Davos is a sign of change. Under Mugabe, Zimbabwe became a pariah state. It broke with the IMF in 2001 after mounting a shambolic and violent campaign to seize white people’s land. It has been in arrears ever since, cutting itself off from international finance.
Mr Mugabe retreated into sulky isolationism. The currency was immolated on a bonfire of hyperinflation. Today, one of the most educated and entrepreneurial population’s in Africa finds itself with almost no prospect of work.
Many of Zimbabwe’s most talented are making a success of it in South Africa and further afield, forming a diaspora rich with experience and know-how. There are reasons to believe that, under Mnangagwa, Zimbabwe could draw a line under elements of this sorry tale. True, he spent 50 years by Mugabe’s side and was the ruthless enforcer of his leader’s authoritarianism.
Mnangagwa’s early cabinet appointments, including key military figures from November’s “non-coup” coup, do not bode well. He should be appointing competent technocrats.
Still, Mnangagwa shows signs of being less of an ideologue than Mugabe. He is making the right noises about foreign investment, scrapping harmful “indigenisation” laws that were an excuse for state pillage and opening up the political system.
To get things done, he will need multilateral finance and an end to sanctions. That makes crucial the international community’s response to the “new” Zimbabwe. Go too slow and Mnangagwa may hunker down into Zanu PF’s old ways. Go too fast and he will assume he can get away with the mere rhetoric of change. This year’s election will be a crucial test.
Mnangagwa has promised democracy will be “strengthened and respected”. He told the Financial Times that election monitors from the EU, the United Nations and the Commonwealth would be welcome. He should be held to his word, but will need to do more. He must allow the formation of an independent election commission and wipe the electoral lists of dead voters. He should also permit the diaspora to vote, even knowing they tilt towards the opposition.Advertisement

Mnangagwa may be calculating that, even if the election is fair, he will be swept to victory on a tide of optimism and amid opposition disarray. That distinct possibility makes it all the more important for the west to prod Zimbabwe in the right direction. In economic matters, that means slimming a bloated bureaucracy, establishing fair and transparent rules for investors and eschewing corruption.
Mnangagwa holds some cards. After years of watching one of Africa’s most promising economies slide towards the abyss, the west will be inclined to give him the benefit of the doubt. He will also be able to count on China, which had grown tired of Mugabe.
Inevitably, Zimbabwe’s new leader will play something of a cat-and-mouse game. Yet like others who have inherited moribund systems at the dead-end of history — think South Africa’s FW de Klerk or China’s Deng Xiaoping — Mnangagwa could be a transformative figure.
The international community needs to play a cautiously supportive role to keep that possibility alive.