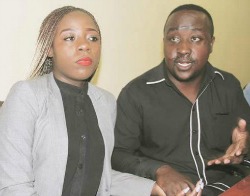 TAFADZWA Mushunje, a Harare model who was cleared on charges of “deliberately infecting a minor with HIV blood” in February, has filed a $100 000 defamation suit against Zimbabwe Newspapers group (Zimpapers).
Mushunje made headlines in February after social media had circulated messages accusing her of abusing her boyfriend, Collin Kanonge’s son.
The model, according to the incriminating social media messages which went viral, injected the minor with HIV infected blood on top of habitually assaulting the kid.
She was also said to have forced the toddler to drink her urine.
Zimpapers publications, namely the Herald and H-Metro, picked Mushunje’s court case and followed it up until it ended.
But it is for the way in which the two publications reported the case that Mushunje, on Friday, took Zimpapers to the High Court demanding to be compensated for defamation.
Appearing before High Court Judge Justice Jester Charewa, Mushunje said the two newspapers provided a platform for the public to injure her reputation.
She said the two papers, H-Metro in particular, opinionated their covering of her court case instead of presenting facts as they came from court.
She said the headlines on all stories about her the word “alleged” was “deliberately” omitted, hence the lawsuit.
“Since then my life has never been the same,” she said.
“In fact, it is a death sentence which was passed on me by these publications, they destroyed my future. My parents expect good things from me like getting married and now the chances of me getting married have been lessened, I am unemployed and no employer would want to associate their brand with me. I was subjected to hatred and discrimination by these publications,” Mushunje narrated to the court after she was asked to justify the lawsuit.
It also came to the attention of the court that Mushunje was also suing the Daily News for $90 000 in defamation damages for publishing the same allegations, a development which Justice Charewa said was not appropriate.
“I am hearing this for the first time that you are suing another newspaper here at the same courts and the case is being heard by another judge? Why are you clogging the court system with one issue, and why was it not brought before my attention, so that it would be consolidated?” asked the judge.Advertisement

Her lawyers, Fungai Chimwamurombe and Tawanda Gombiro of Mberi Chimwamurombe legal practice, apologised before the court.
Zimpapers’ reporter, Nyore Madziyanike who covered Mushunje’s entire court case was represented by Oscar Gasva of Chirimuuta and Associates. Madziyanike went through rigorous cross-examination which lasted for nearly three hours before the case was postponed to 7 November for continuation.