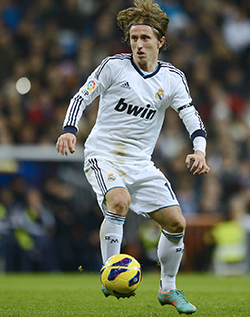 REAL Madrid are set to be without influential midfielder Luka Modric for up to a month due to a knee injury.
The Croatian sustained the injury in Tuesday’s 2-2 draw at Borussia Dortmund although he managed to complete the 90 minutes.
“Following tests carried out on Luka Modric at the Sanitas La Moraleja University Hospital, he has been diagnosed with an injury to the articular cartilage in his left knee. His recovery will continue to be monitored,” Real said in a statement.
Modric is set to miss Real’s La Liga fixtures with Eibar, Real Betis and Athletic Bilbao and Alaves as well as their Champions League game at home to Legia Warsaw, while he is a doubt for the return trip to Poland.
He will also miss Croatia’s World Cup qualifiers against Kosovo and Finland.
Modric’s prolonged absence is the latest midfield blow for Real, who recently lost Casemiro for up to two months with a fractured fibula.
News of Modric’s injury emerged after Zinedine Zidane gave a news conference on Saturday before Real’s game with Eibar on Sunday, when they will look to pick up a first win in four games following draws with Villarreal, Las Palmas and Dortmund.
Real twice squandered the lead in their last two games, drawing 2-2 against Las Palmas and Dortmund, but the coach said he was not concerned about the team’s displays.
“When you draw twice it means something, especially when you had the game under control. We had a lot of chances but I’m not worried,” Zidane said.
“We’ve conceded twice in the last two games and that hasn’t happened to us for a long time. Now we have to get back to winning, because we always want to win. The most important thing is to be at our best from the start to the finish.”
Zidane confirmed midfielder Isco would take Modric’s place against Eibar and make his first start of the season.
Isco was named in the Spain squad for World Cup qualifiers against Italy and Albania despite playing just 55 minutes of league football this campaign.Advertisement