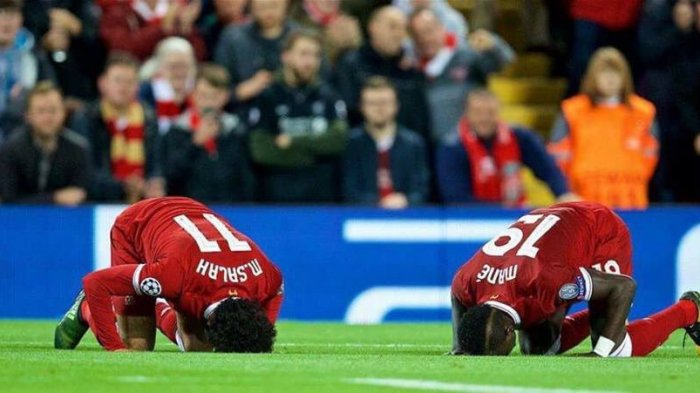 Salah is a practising Muslim and the Islamic festival of Ramadan, which requires fasting during daylight hours for a month, begins on May 15 — ten days before the Kiev showdown.

Shawki Allam, the Grand Mufti of Egypt, has given permission to Salah and his international team-mates in the Egyptian squad to postpone their fasting in the days building up to the World Cup.

But Salah and his fellow Muslims in the Liverpool dressing room — Sadio Mane and Emre Can — will have a decision to make if the Reds reach the final: risk their physical condition by denying themselves food and drink while training ahead of flying to Kiev, or fail to observe “sawm” (fasting during Ramadan), one of the five pillars of Islam, for the sake of football.

Salah admitted in 2014 he had found observing Ramadan difficult to combine with pre-season training at Chelsea.

Salah said: “Ramadan was a bit difficult for me because we had two training sessions every day, the weather was very hot and I played in every game.

“I wasn’t even able to drink water until 9.30pm. Although I am used to it, it’s finished now and I can eat and drink as normal.

“When you train twice a day, your energy levels drop by the second session, but it means a lot to me so I’m very happy and I feel good.”

Liverpool boss Jurgen Klopp revealed in an interview with Channel 4 News how Salah, Mane and Can maintain their faith while being professional footballers.

Klopp said: “Salah is a Muslim. He’s doing all the things that Muslims do.

“Before a game, washing procedures and stuff like that.

“We come a minute or two minutes early in the dressing room so that he can be ready for the game. It’s him, Sadio and Emre Can.”

Klopp went on to acknowledge what an important symbol Salah has become in a world full of conflict and anti-Muslim bigotry. The Liverpool boss added: “It’s fantastic. It’s exactly what we need in these times.

“To see this wonderful young man, full of joy, full of love, full of friendship, full of everything, in a world where we all struggle to understand all the things happening around this planet.

“Mo is the perfect ambassador for Egypt, for the whole Arab world.”

Salah’s high profile will put extra pressure on his decision about Ramadan. Entrepreneurs are cashing in on his success by mass-producing Ramadan lanterns in his image.

One Saudi Arabian newspaper has reported that a senior local official is proposing to give Salah a piece of land in Islam’s most holy city, Mecca, as reward for being named PFA Player of the Year.

Fahd al-Rowky said: “There are several choices regarding giving this piece of land.

“The way to go will be determined by captain Mohamed Salah as well as the Saudi system.

“If the Saudi system allows the land to be owned by Salah, he will be given a piece of land in holy Mecca outside Haram. The other option will be to have a mosque built on the land in his name.”